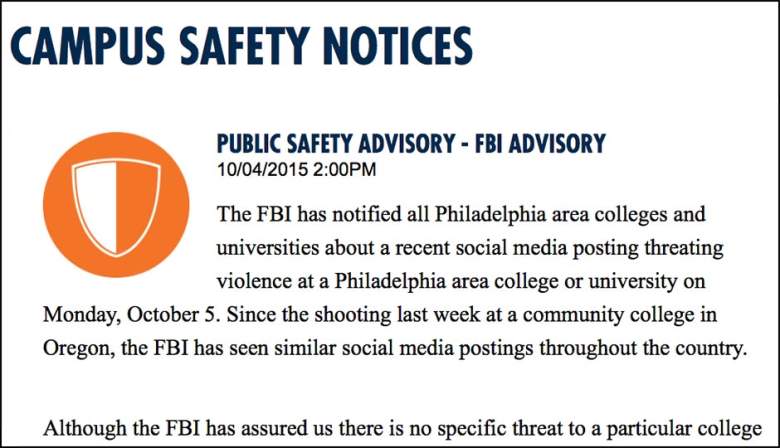 One of many campus safety notices issued after the FBI’s warning. This one is from Drexel University.

The FBI has issued a warning to Philadelphia colleges about a possible threat on Monday. Here’s what we know so far.

1. The Threat Is Related to a Social Network Posting

The FBI has issued a safety advisory for all colleges in the Philadelphia area. The threat is related to a social media posting that is threatening violence at a university in the area. Because of the shooting at Umpqua Community College, the FBI is taking an abundance of caution. The advisory stated that the FBI has received similar posting throughout the country.

According to a related thread on Reddit, the warning may have been made after a post was made to 4chan that talked about violence in Philadelphia on Monday, October 5. The thread read, in part, that the “beta rebellion” had begun and the shooting in Oregon was just the first. The posting stated that at 1:00 p.m. on October 1, someone else would take up arms against a college in Philadelphia. Anyone in the area is encouraged to stay home, the message, which was reposted on Imgur, read.

2. The Warning is for Monday, Around 2 PM Eastern

According to the University of Pennsylvania’s advisory post, the threat is specifically for Monday, October 5, at around 2:00 p.m. Eastern/1:00 p.m. Central. A specific university wasn’t specified, so all universities and colleges in the area are being advised to take caution and be on the lookout for anyone suspicious.

3. There Is No Knowledge of a Specific Threat

The FBI has stated that it doesn’t have any knowledge of a specific threat. Drexel University has said that it’s going to increase patrols on Monday, the university reported. They are going to be on the lookout for anything suspicious.

4. Students Aren’t Sure What To Do With the Warning

How many dozens of institutions could this warning apply to? http://t.co/vVb76DOYK5

A student from La Salle University told Philly Mag that she had no idea what to do with the information. She is supposed to be on campus during the time of the threat, so she doesn’t know if she should be looking over her shoulder or what she should be doing. Other students, meanwhile, have said that they are planning on just skipping classes tomorrow or during that time.

if Philadelphia schools are being threatened, why is your only response to send a warning? why not cancel school for the day?

5. Others Are Concerned Because They Haven’t Gotten a Warning Yet

Hey, @USciences where's our warning for the violence threats for tomorrow?????? You know, because we go to a university in Philadelphia…

Other students are concerned and not sure what to do because they haven’t actually received a warning yet, even though they attend colleges in the area. One student, who attends University of the Sciences, posted on Twitter wondering why they hadn’t received news about the warning yet. A La Salle University student told Philly Mag that she only found out about the warning because she saw a safety advisory on the university’s website, but no one was sent a text or an email warning. Philly Mag stated that the FBI hadn’t responded to a request for a comment. 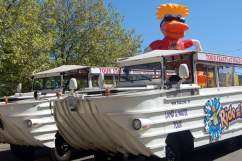