A 29-second clip that leaked of an alleged Indiana University Alpha Tau Omega hazing ritual, in which a student has his head between a woman’s legs, has caused the university to suspend the fraternity and the frat’s national office to revoke the local chapter’s charter. According to the frat’s national office, the man who has his head between the woman’s legs is a fraternity brother, not a pledge, and “no pledge was compelled to participate.” The question has been raised of whether the act was consensual, as in the video the frat brother tries repeatedly to break free but is held in place as his peers pressure him to continue. The woman was later found to be one of two “exotic dancers” hired for the event.

Our campus is committed to a culture of care. Alpha Tau Omega (ATO) is suspended immediately, pending investigation into hazing allegations.

The original video was leaked onto a Twitter account called “ATO Video.” “ATO” refers to “Alpha Tau Omega,” but the tweet containing the video has since been removed. The full video can be viewed above. Be warned — it contains graphic imagery that viewers may find disturbing.

Alpha Tau Omega has drafted an official statement regarding the video. It reads:

The National Office of the Alpha Tau Omega fraternity has revoked the charter and closed the Delta Alpha chapter at Indiana University following the release of a highly inappropriate and vulgar video.

The video from a smartphone shows a sex act that occurred last week. The event was unauthorized involving about half of the chapter’s membership. The National Fraternity investigation revealed the 21 year old man in the video was an initiated member, not a pledge, and the two women in the video were exotic dancers hired by one of the members. Our investigation revealed that no pledge was compelled to participate. Regardless, the actions are contrary to the ideals and principles of Alpha Tau Omega and are highly offensive.

The National Fraternity, with strong encouragement from local alumni advisors, investigated the incident and took swift disciplinary action. The revocation of the charter means the chapter is closed, effective immediately and all chapter activities must cease. The National Fraternity will continue to work closely with Indiana University officials. 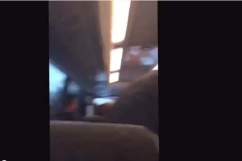 Loading more stories
wpDiscuz
11
0
Would love your thoughts, please comment.x
()
x
| Reply
A 29-second clip that leaked of an alleged Indiana University Alpha Tau Omega hazing ritual, where a man has his head between a woman's legs, has caused IU to suspend the frat.