Native Americans dance in the grand entry of the Julyamsh Pow Wow in Post Falls, Idaho on July 23 2004. The Julyamsh is touted as the largest pow wow in the Northwest. (Jerome Pollos/Getty Images)

Indigenous People’s Day, sometimes called Native Americans’ Day, is a counter-celebration holiday for the Euro-centric Columbus Day in the United States. This year it takes place on October 12. It promotes the history of American Indians.

The idea of a replacement holiday for Columbus Day with a counter-celebration of Native American culture was first conceived of in 1977 at the International Conference on Discrimination Against Indigenous Populations in the Americas, hosted by the United Nations in Geneva, Switzerland.

It took over twenty years for natives throughout all the Americas to agree on the enactment of the holiday. In 1990, at the First Continental Conference on 500 Years of Indian Resistance in Quito, Ecuador, native groups agreed that in 1992, exactly 500-years after Christopher Columbus’ expedition to the Americas, they would celebrate native culture in counter-protest to the government-sponsored Columbus Day.

The Declaration of Quito begins:

The Indians of America have never abandoned our constant struggle against the conditions of oppression, discrimination and exploitation, which were imposed upon us as a result of the European invasion of our ancestral territories.
Our struggle is not a mere conjunctural reflection of the memory of 500 years of oppression, which the invaders, in complicity with the “democratic” governments of our countries, want to turn into events of jubilation and celebration. Our Indian People, Nations and Nationalities are basing our struggle on our identity, which shall lead us to true liberation. We are responding aggressively, and commit ourselves to reject this “celebration.”

2. Christopher Columbus Is a Divisive Character in History

In fact, he is viewed by most native groups not as a discoverer but as a subjugator, bringing with him European supremacy, slavery, and being the harbinger of cultural genocide for Native Americans, and eventually Africans, too.

Columbus’ landing in Hispaniola (modern day Haiti and Dominican Republic) wiped out the native Taino people with disease and slavery. Native population immune systems were not equipped to fight off common European diseases, like small pox. When native populations were all but extinct from disease, the trans-Atlantic African slave trade was ramped up to fill this slavery void.

After the 1992 Declaration of Quito, various United States adopted the measure to help celebrate native cultural and contribution to the United States.

The West Coast was the first to lead the charge, and in 1992, Los Angeles forewent Columbus Day altogether and declared the entire year “Year of the Indigenous People.” The idea was help pushed by a group of Native Americans at Berkley who were trying to publicize the idea that Columbus was a villain.

Since then many major cities have adopted an Indigenous People’s Day celebration option for its native populations, including San Francisco, Seattle, and most recently Minneapolis.

4. Some Americans Disagree With Vilifying Columbus

Christopher Columbus lands on Watling Island and meets the natives, while three of his shipmates erect a cross. (Hulton Archive/Getty Images)

Like any progressive movement that upsets tradition, there are those who are staunchly opposed.

And a lot of Americans find the entire idea of vilifying Christopher Columbus not only wrong, but also insulting. Especially by judging him with today’s standards.

In fact, Columbus may not have “discovered” America at all, as there is a long line of possible explorers that landed in the Americas before him, including Leif Ericson, Vasco da Gama, and Hal Wilson.

And accrediting the subjugating and destruction of Native American culture solely to one man is stated to be offensive by many Americans, especially Italian-Americans.

The problem with negative attitudes towards native populations in the Americas is still an ongoing problem in all modern day countries, and this may really be behind the motivating force of rancor seen by descendants of immigrants by natives towards Christopher Columbus. Columbus is merely seen as an icon of oppression and destruction of the once flourishing peoples of the Americas.

In Brazil, many natives are still struggling to keep their land rights as Brazilian industry pushes further into the Amazon rainforest.

According to Inter-Press News out of Brazil:

The lands that are the traditional homes of indigenous people, peasants and forest peoples, such as those living along riverbanks, fisherfolk, rubber tappers and fruit gatherers, are threatened by the advance of agribusiness, hydroelectric stations that flood extensive areas of the Amazon jungle, and highways and large mining projects. 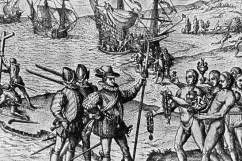