A video allegedly leaked from a Muslim center in France shows an extremist imam preaching that all music is of the devil and those that listen to music are “kafir”, or infidels who will be “swallowed up by the earth” and “transformed into apes and pigs.” He then tells the impressionable children that all music, no matter what the language, is “haram”, meaning blasphemous to Islam. A transcript of his sermon reads:

When Allah speaks of music in the Koran he reminds us that music is the devil’s language. When did he remind us of this? So those who love music and listen to music, who are they listening to? The devil. They listen to the devil. There are people who disobeyed Allah and will listen to the devil. What did the prophet say about these people? He said, “They will be swallowed up by the earth.” And they will be transformed into apes and into pigs. So he risks being swallowed up by the earth. Second point: Allah will transform them into apes and pigs. Those who love music would love to be transformed into apes and pigs, you agree. No matter what the language of the music: Arabic, French, Turkish… never mind. If there is song and there are musical instruments, when you hear a violin, a drum, a synthesizer, or violin. If you hear instruments it is haram. And the one who likes haram will be with the devil. And he who likes music, is he loved by the devil or Allah? The devil! So choose your side. Empty your mp3 and transform it and replace it with the best words that exist: the Koran. If one says that musical instruments are haram and music is haram and that who listens or loves music risks being transformed by Allah into a pig, or will look like who? The devil.

While the preacher’s words about music may seem extreme, his rhetoric is in line with what some moderate Muslims views on music are. According Al-Islam, music is sometimes viewed as “lawh.” Lawh is:

…any thing which diverts the mind from serious thinking. “Vain talk” has been interpreted by the Imam as some talk, sound or thing which diverts the attention of man from the ultimate aim of his creation; in other words makes him forget Allah and His commands. For example fictions romantic stories and such useless talks. “It includes ‘Music’, intoxicants and all such diversions.

However this is not a belief held by all Muslims. According to Islam Awareness:

There is not a single Noble Verse in the Noble Quran that prohibits music. In fact, music and songs are allowed in the Noble Quran as we saw above. Some Muslims however claim that Prophet Muhammad peace be upon him did prohibit music.

So while “lawh” is prohibited, its definition is up to the interpreter. 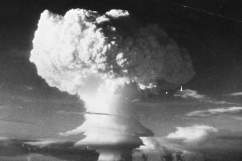 Loading more stories
wpDiscuz
3
0
Would love your thoughts, please comment.x
()
x
| Reply
A video allegedly leaked from a Muslim center in France shows an extremist imam preaching that all music is of the devil and those that listen to music are "kafir."