Niya Kenny was arrested after she spoke out against the deputy who violently took down her classmate at Spring Valley High School. (Screengrab via WLTX-TV)

An 18-year-old student at Spring Valley High School in South Carolina says she was arrested after standing up for her classmate, who was violently slammed down while sitting at her desk Monday in an incident that has gone viral.

Niya Kenny told WLTX-TV she was also taken into custody by Richland County Deputy Ben Fields, the school resource officer, along with the unnamed student who was thrown to the ground and dragged across the floor of their classroom.

“I was crying, screaming and crying like a baby,” Kenny told the news station. “I was in disbelief.”

The sheriff’s department and the FBI are investigating the incident. Fields has been placed on administrative duty.

1. Kenny Says ‘I Couldn’t Believe This Was Happening’

Niya Kenny told WLTX-TV the other girl was asked by their teacher to get off her cell phone, but refused. She also would not leave the classroom with an administrator who the teacher called, so Deputy Ben Fields was brought in. Multiple videos recorded by students show Fields grab the girl by the back of her neck and flip over the desk, with the girl still in it. He then drags her and the desk to the front of the classroom and handcuffs her.

“I know this girl don’t got nobody and I couldn’t believe this was happening,” Kenny told the news station. “I had never seen nothing like that in my life, a man use that much force on a little girl. A big man, like 300 pounds of full muscle. I was like ‘no way, no way.’ You can’t do nothing like that to a little girl. I’m talking about she’s like 5’6″.”

Tony Robinson Jr., another student who recorded the incident, told WLTX-TV, “She really hadn’t done anything wrong. She said that she had took her phone out, but it was only for a quick second.”

Robinson said, “I’ve never seen anything so nasty looking, so sick to the point that you know, other students are turning away, don’t know what to do, and are just scared for their lives. That’s supposed to be somebody that’s going to protect us. Not somebody that we need to be scare off, or afraid.”

2. She Says Deputy Fields Told Her ‘Since You Have So Much to Say You Are Coming Too’

Kenny says she was arrested after standing up for her classmate.

“I was screaming ‘What the f, what the f is this really happening?’ I was praying out loud for the girl,” says Kenny. “I just couldn’t believe this was happening I was just crying and he said, since you have so much to say you are coming too. I just put my hands behind my back.” 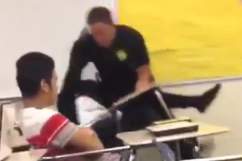 3. She Was Charged With Disturbing School, a Misdemeanor

The Disturbing School charge against #NiyaKenny stems from a 1976 law in South Carolina #AssaultAtSpringValleyHigh pic.twitter.com/hHKOUnh2Su

Kenny was charged with disturbing school, which is a misdemeanor crime in South Carolina. She was released from custody after posting $1,000 bail.

4. Kenny’s Mother Says Her Daughter Was ‘Brave’ to Come to Her Classmate’s Defense

Kenny’s mother also spoke to WLTX-TV, saying she is not angry with her daughter.

“I’m not mad at her, she was brave enough to speak out against what was going on and didn’t back down and it resulted in her being arrested,” Doris Kenny told the news station. “..Looking at the video, who was really disturbing schools? Was it my daughter or the officer who came in to the classroom and did that to the young girl?”

5. Students Say Deputy Fields Has a History of Abusive Behavior

Current and former students say he has a history of abusive behavior:

Yes, Deputy Fields has done this numerous times. But this is the first time I've seen it captured on video and shared like this.

One student says she saw Fields “slam” a pregnant student in 2012:

I was coming from lunch and saw Deputy Fields slam that pregnant woman. I was frozen in shock at how he was man handling her.

Deputy Fields has a history of being aggressive with students. How do you all plan to fix this? @RichlandTwo https://t.co/khbMMr481f

All jokes aside … but Fields ain't getting fired , he done this shit numerous times !

Ppl from Columbia not surprised at the actions of Fields. We surprised it got caught on video.

Fields, 34, has been with the sheriff’s office since 2004. He was sued in 2007 for excessive force, but a federal jury ruled in his favor. A pending federal civil rights lawsuit accusing him of falsely accusing a black Spring Valley High School student of being in a gang, leading to his expulsion, is set for trial in January. Read more about Fields at the link below:

Loading more stories
wpDiscuz
9
0
Would love your thoughts, please comment.x
()
x
| Reply
Niya Kenny, an 18-year-old student at Spring Valley High School, was arrested after standing up for a classmate who was taken down by Deputy Ben Fields.