SSG Safaris led the expedition that killed one of the largest elephants in Africa. Here, professional hunter Nixon Dzingai is seen with the unidentified German hunter. (Facebook/Game Animals)

SSG Safaris is the hunting group that led the expedition that killed the biggest elephant in Africa, The Telegraph reported. The German hunter’s identity has not been released, but Germany is considering banning the elephant’s tusks from being imported. The elephant was killed in Zimbabwe’s Gonarezhou national park. It was estimated to be 40 to 60 years old. 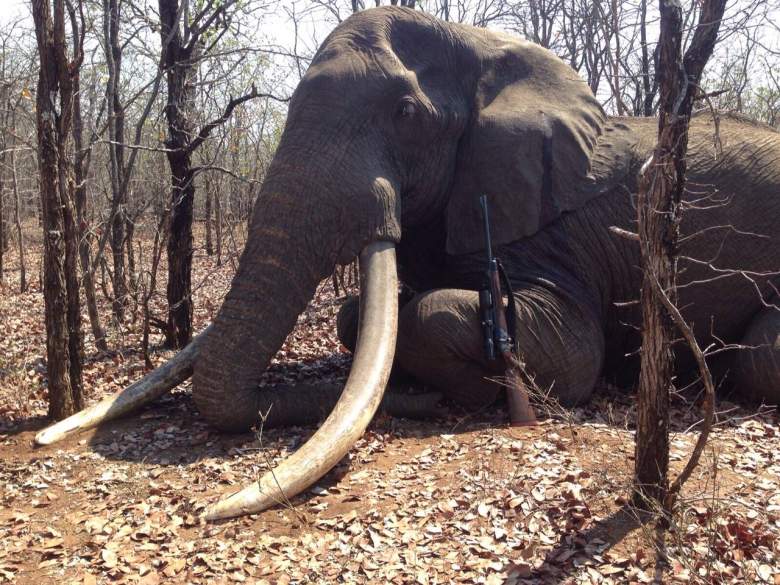 The elephant that Nixon Dzingai with SSG Safaris killed may have been 60 years old. (Facebook/Game Animals of the Past and Present)

SSG Safaris, which led the hunt, has said that the hunt was legal. A German hunter paid the company $60,000 for a permit to kill the elephant, The Telegraph reported. SSG Safaris defended the hunt, saying it was legal and that the organization paid up to 70 percent of its hunting fees back to the community. The website for SSG Safaris has been taken down.

2. The Elephant Was the Largest in Africa And May Have Been Up to 60 Years Old

The elephant that was killed was estimated to be between 40 and 60 years old, The Telegraph reported. It had never been seen before at Zimbabwe’s Gonarezhou national park. Each of its tusks weighed 120 pounds each, hinting at the elephant’s age. This may have been the biggest elephant killed in Africa in 30 years. A photographer, Anthony Kaschula, wrote on Facebook that these rare elephants should be celebrated because they’re more valuable alive than dead.

Louis Muller, chairman of the Zimbabwe Professional Hunters & Guides Association, told The Telegraph that they are working to determine the elephant’s identity:

There have been five or six giant tuskers shot in the last year or so, and we knew all of them, but none as big as this one…”

He said his organization had suggested collaring unique elephants to protect them, but nobody responded to his suggestion.

3. Nixon Dzingai, the Professional Hunter from SSG Safaris, Has a History of Hunting Very Large Elephants

Nixon Dzingai poses with a different hunter. He has led many expeditions that killed large elephants in Zimbabwe. (Facebook/Hunting)

Nixon Dzingai has been named as the professional hunter who led the 21-day hunt. He said that he and the hunter had no idea how large his tusks were or how old he was until after the elephant was shot and it was too late, The Telegraph reported. They had not stalked the elephant and it had arrived unexpectedly one morning toward the end of the trip, he said.

However, other reports tell a different story. A poster on a hunting forum wrote that that he had talked with Dzingai before and he said they had been tracking this particular elephant for awhile. He’d seen him numerous times before, but the elephant always made it to safety before he could be shot.

Dzingai has a history of tracking and killing very large elephants, Elephant Daze reported. A story from 2011, for example, talks about Dzingai working with a Spanish hunter to take down a 100-pound elephant, according to Hunting Report. In this case, each tusk weighed 101 pounds. The article goes on to say that Dzingai is known for helping hunters find jumbo-sized elephants that weigh 70 pounds or more.

4. Some Think the Elephant May Have Been Nkombo, a Collared Male

It’s been speculated that the elephant may have been Nkombo, a collared elephant who lost his GPS collar in 2014. However, experts think this is unlikely because Nkombo was last seen on October 3 in Kruger, which is several hundred miles from the park where the elephant was killed less than a week later, The Telegraph reported. Experts are looking into this and hoping to determine for certain whether or not the elephant was Nkombo soon.

Meanwhile, Germany is considering banning the elephant’s tusks from being imported from Zimbabwe, The Telegraph reported.

5. PETA Is Offering a Reward for the Hunter’s Name

PETA is offering a reward for the hunter’s name. The hunter was on a 21-day safari and had killed several animals before killing the elephant. SSG Safaris has refused to release the name of the German hunter seen in photographs with the elephant. The Telegraph reported that the man who helped arrange the hunt said it was legal and nothing to be ashamed of:

We hunters have thick skins and we know what the greenies will say. This elephant was probably 60 years old and had spread its seed many many times over.”