Aitkin County, Minnesota, Deputy Steven Sandberg was fatally shot in the line of duty at St. Cloud Hospital by a suspect he was guarding. (Family photo via KSTP-TV)

A Minnesota deputy sheriff was shot and killed with his own gun by a suspect he was guarding at St. Cloud Hospital early Sunday morning.

Aitkin County Deputy Steven Sandberg, 60, was involved in a struggle with the suspect, who was being watched by police at the request of the hospital, police said at a press conference. The suspect, Danny Leroy Hammond, was able to take Sandberg’s gun and fatally shot him with it.

Hammond, 50, died after he was shot with a Taser while he was being detained by hospital security officers.

1. The Shooter Was Suspected of Holding His Wife Hostage & Feeding Her Rat Poison

This is a 25-year-old mug shot of Danny Hammond, who killed Deputy Steve Sandberg, provided by DOC pic.twitter.com/3QE3QRWODq

The suspect, Danny Leroy Hammond, was being treated at the hospital after he was found unresponsive at his home following a suicide attempt, KARE-TV reports. The hospital called the Aitkin County Sheriff’s Department to monitor the suspect. He had not yet been arrested and was not in handcuffs.

Hammond was facing charges including kidnapping, assault and terroristic threats. According to court documents obtained by KARE, Hammond’s wife was planning to divorce him after 25 years together, including 12 years of marriage. On October 10, she told Hammond she didn’t love him anymore, and he locked all the doors and windows in their house and took out his loaded gun, telling his wife they were together “until death do we part.”

His wife told police she thought Hammond, who had been abusive throughout their relationship, would kill them both. He forced her to eat food with rat poison in it, she told police. She eventually was able to convince him to let her leave on October 11. Officers responded to the home, but Hammond was gone. Police went back on Monday, October 12, and found Hammond with several abrasions. He was then taken to the hospital.

You can read part of the court documents and the police press release below:

Investigator Steve Sandberg visited Hammond's home/spoke with his wife, a week prior to being shot by Danny Hammond. pic.twitter.com/hxYVktjXEs

He has a criminal record dating back to 1990, KARE-TV and KMSP-TV report:

Danny Leroy Hammond, who killed Deputy Steve Sandberg, was convicted in 1990 of felony escape from custody. Follow me for more updates today

He was at the hospital for more than a day. The hospital said it contacted police because of the seriousness of the incident that occurred before he was admitted.

2. Sandberg Was Alone in the Room With the Suspect

The details of what led up to the struggle are under investigation. Deputy Sandberg was in the hospital room with the suspect, Hammond, when the shooting occurred.

The shooting happened on the 5th floor of the hospital in its medical unit.

The shooting happened at about 5:15 a.m., according to the Pioneer Press. 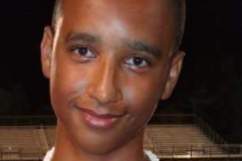 3. Security Officers Hit the Suspect With a Taser & He Went Into Cardiac Arrest

Lots of police at St. Cloud hospital. A deputy was killed by a patient after 5:00 a.m. Today pic.twitter.com/IWluvABgmi

Police said two hospital security officers entered the room after the shooting and were able to hit Hammond with a Taser and then detain him. An deputy sheriff who was coming to relieve Sandberg also helped take down Hammond.

While he was handcuffed, Hammond went into cardiac arrest. Hospital staff were not able to revive him.

Dispatch audio from the time of the shooting has been posted online by Minnesota Police Clips.

In the recordings, a security officer tells dispatchers that there is an officer down in room South 527. He describes the officer as “an inmate.”

4. Sandberg Is Survived by His Wife & Daughter

The procession of squads on 94 near Hwy 24 for the officer killed in the line of duty at St. Cloud Hospital. #RIP pic.twitter.com/AeO0QOjeOX

The Aitkin County Sheriff’s Department said Sandberg has been with the department since 1991. He has worked as an investigator for the past 20 years.

He is survived by his wife and daughter.

“Part of being a good police officer is loving people, and he did that, he embodied that,” Pastor Dawn Houser of United Methodist Church in Aitkin told KARE-TV. “He was a good dad, he was a good husband, he was a good neighbor, he was a good parishioner in the church, and this is going to be devastating to his family.”

A line of police vehicles from around St. Cloud escorted a hearse carrying Sandberg from the hospital to the medical examiner’s office.

Details about funeral and memorial services have not yet been finalized.

According to the Officer Down Memorial Page, Sandberg is the 27th police officer killed by gunfire in the line of duty this year.

“I deplore the terrible, senseless murder of Deputy Sheriff Steven Sandberg. On behalf of all Minnesotans, I extend my deepest condolences to his family. This tragedy reminds us that Minnesota’s law enforcement officers risk their lives every day and night to keep us safe,” Governor Mark Dayton said in a statement. 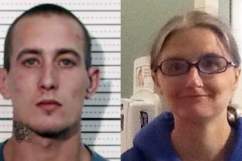 Loading more stories
wpDiscuz
26
0
Would love your thoughts, please comment.x
()
x
| Reply
Aitkin County, Minnesota, Deputy Sheriff Steven Sandberg was shot and killed with his own gun by a suspect he was guarding at St. Cloud Hospital.