For protesting against Sea World’s alleged cruelty, Jackass star Steve-O will spend 30 days in prison, according to an Instagram post from the star. In addition to his jail time, he also has to pay $14,000 in restitution, reports ABC Los Angeles.

He wrote on the social media site:

I just got sentenced to 30 days in LA County jail, and this is what I have to say about it: “Considering I’ve become a clean and sober, dog-rescuing vegan, I must say I’m ready to go to jail– not just because it will bring so much attention to the plight of orcas in captivity, but because it’s nice to let people know I haven’t lost my edge. What can I say, I’m a jackass.

My whole crane-climbing, fireworks debacle really turned out to be pretty meaningful in the end, too. I mean, if your goal is to make a statement about captivity, you may as well get yourself locked up! To help give back to the City of Los Angeles, I launched a campaign today to raise money for at-risk, inner city youth, by raffling off chances to win an all-expenses-paid trip to be my red carpet, VIP guest at the taping of my Showtime comedy special next month, which is called “Steve-O: Guilty As Charged”.

There is a link to a new crazy stunt video I just made to let people enter to win in my bio. Los Angeles, I love you, thank you for everything!” -Steve-O

That message was accompanied by this cartoon:

KTLA reports that Steve-O, real name Stephen Glover, pleaded no contest to two misdemeanor counts. Originally, he had been charged with five counts for the August 9 prank which saw him drop an inflatable whale with the message “Sea World Sucks” written on it. He’s also facing 36 months of probation while also being banned from Hollywood’s Entertainment District. Earlier, the Los Angeles Times reported that Steve-O could have faced up to 11 years in prison for the stunt, which involved firecrackers, something he’s also now banned from using.

This wasn’t the first time he’s taken on Sea World. Back in May 2014, he changed a Sea World road sign to read “Sea World Sucks,” for which he received a $239 fine and a ticket. 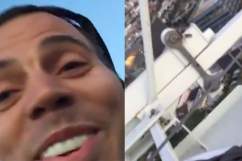 Loading more stories
wpDiscuz
5
0
Would love your thoughts, please comment.x
()
x
| Reply
For protesting against Sea World's alleged cruelty, Steve-O will spend 30 days in prison, according to an Instagram post from the star.