Jeremy Kingg, 22, one of the three arrested out of a group of five, told ATTN News “that the group was uncertain if they were allowed to cross the street at about 2:30 a.m.” They then called out to nearby Austin police officers to ask if they could cross, but the officers didn’t respond. The group decided to cross.

When the officers approached the group to ask them about the jaywalking, one of the men said something rude under his breath to an officer, reports KENS 15 San Antonio News.

The video allegedly shows what happened after the “rude comment” and shows officers aggressively arresting three of the five people. Rolando Ramiro began to film. Matthew Wallace and Lourdes Glen were also arrested and charged with jaywalking. The trio ended up spending the night in jail, and two of the men’s charges were dropped. Kingg is African-American.

Kingg tweeted about the incident:

thanks for the love, support, and prayers guys… im free now and im okay. just got out

The Austin Police Department released a statement about the arrests:

As is standard protocol, the Chain of Command will review the Response to Resistance and the incident to determine what led up to the events captured in the video and whether the officer’s actions were in compliance with APD policy. 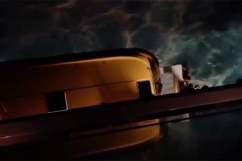