A mysterious bright light that streaked over the nighttime sky in California was a huge mystery for a few hours last night.  The light was so bright that it could be seen in parts of Nevada and Arizona. Some reported that it faded from bright red to white or blue, some thought it was a meteor, and others thought it was a nuclear bomb. The U.S. Navy later announced that this was part of a missile test, but not everyone is believing the explanation.

These are the videos you need to see.

As you can see in the video posted above, people had no idea what was happening when they first saw the light. In this video, the viewers realize it’s coming toward them as they’re filming. One guy keeps repeating: “I don’t know what’s happening. This might be the end.” And one girl asks, “Is Russia bombing us… Wait, is it literally coming towards us?” A guy with her responds: “It kind of looks like it…” The girl keeps wondering if she should call her mom, until they finally stop filming.

The Navy Later Announced This Was an Unarmed Trident Missile Test

The light show featured a mysterious bright light moving across the night sky, lighting up the skies from Southern California to the San Francisco Bay area, KTLA reported. The Navy later announced that this was an unarmed Trident missile launched from the Kentucky submarine off the coast of Southern California. The Ohio-class ballistic missile submarine performed the scheduled launch, the San Diego Union-Tribune reported. It was part of a series of tests to ensure the system is reliable, the Navy said.

Some people did get advanced notice…of something. On Friday, ABC 7 reported that late night landings at the Los Angeles International Airport would be rerouted over the next week due to “secret” military exercises. Flights late at night are normally routed from the west, over the ocean, to not wake residents. But that part of the Pacific ocean is closed.

At the time of the report, the military was not saying what the exercises were for and LAX also said that it did not know. Even now, it’s not known if this alert was due to the missile testing. But it’s reported that the airspace will be restricted through Thursday night. 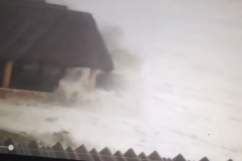 Hurricane Patricia: The Videos You Need to See

Not Everyone Is Believing the Official Story

Theories ranging from aliens to top-secret government projects are being shared on social media by residents who just aren’t convinced by the missile testing announcement. Some believe it was a meteor or other celestial object or a secret NASA project, while others are positing aliens or some type of classified test being disguised as a Trident missile launch. Part of the confusion stems from the fact that the launch was not announced prior to the event. Residents nearby said that launches are always announced ahead of time. However, the Navy has said that these launches are not routinely announced and are typically classified until after the launch takes place, The San Diego Union-Tribune reported.

Loading more stories
wpDiscuz
7
0
Would love your thoughts, please comment.x
()
x
| Reply
A bright light over California was explained away as a missile test, but some people are doubting the claim. These are the videos. What do you think?