A main focus in the debate were the recent attacks in Paris and ISIS’ role in the terror.

On the topic of the spread of Islamist terror on a global level, “Bernie Sanders and Martin O’Malley cut quickly to the invasion of Iraq and sought to fault Clinton for her vote on Iraq, her actions on foreign policy as secretary of state” reports CBS. However, Clinton responded, “I don’t think that the United States has the bulk of the responsibility. I really put that on Assad and on the Iraqis and on the region itself.”

To learn more about how the debate, how the candidates did, and who is really ahead, click here. 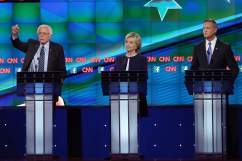