An American student was shot dead in Israel while delivering food packages to soldiers. The suspect in the attack is a Palestinian terrorist who was arrested by members of the IDF. Six other American students suffered minor injuries in the attack. Ezra Schwartz is the American who was killed near the Gush Etzion region in Israel on the afternoon of November 19.

He was a Yeshiva student from Massachusetts. It followed an earlier stabbing attack in the city of Tel Aviv which saw two Israelis killed by a Palestinian man inside an office building. Schwartz was 18 years old.

1. In Total, 9 People Were Shot in the Attack

Israeli soldiers stand next to the body of an unidentified man at the site of the attack. (Getty)

Haaretz reports that Schwartz died along with two others in the West Bank. According to the Associated Press, Schwartz and others were rammed and then shot when they attacker crashed his car into their group.

CBS News reports that six other people were wounded in the attack.

The suspect, a Palestinian man, was arrested, according to tweet from the IDF. The Gush Etzion region is just south of Jerusalem. The BBC reports that one of those killed was an innocent Palestinian man. The other was an Israeli citizen named Yaakov Don HY”D.

2. He’s the Second Graduate From His High School to Be Killed in Israel in the Last 12 Months

According to his Facebook page, Schwartz was a native of Sharon, Massachusetts. There, he attended the Maimonides School in Brookline. During the summer, he also volunteered at Camp Yavneh in New Hampshire. His funeral will be held in America, according to a statement from Schwartz’s school in Israel. YNET reports that the group were attacked while they were heading to hand out food to Israeli soldiers.

Students at #MaimonidesSchool were sent home early after learning a former student was killed in #Israel. #7News pic.twitter.com/M4Xk0qvAW3

Schwartz was a keen baseball player in high school. During his senior year, he was named player of the game in six of his team’s games. His high school head of school Naty Katz told Fox Boston:

The entire Maimonides School Community is profoundly saddened as we mourn the tragic loss of our recent graduate Ezra Schwartz, Class of 2015, who was murdered in a terrorist attack today in Israel.

Ezra was spending his gap year studying in Israel.

Our thoughts and prayers are with Ezra’s family, classmates and friends.

In November 2014, the community at the Maimonides School in Brookline was forced into mourning after Rabbi Moshe Twersky, 59, was killed in an attack on a Jerusalem synagogue, reported WBUR. The school said in a statement that Rabbi Twersky’s grandfather had actually founded Maimonides.

An 18-year-old American boy studying in Israel before college murdered by Palestinian terrorists. May #EzraSchwartz's memory be a blessing

His death has led to an outpouring of emotion on Twitter, with some questioning what the Obama administration’s response will be to the attack:

Rest in Peace Ezra Schwartz. A boy just like me, here to enjoy a year in Israel. It cost him his life When will the world wake up?

A young American named Ezra lost his life today in a terror attack in Israel. May his memory be a blessing.

Rest In Peace my fellow New Englander Ezra Schwartz. You and all Jews who have died today died fulfilling mitzvah of being in Israel.

Fuck everything about this. Ezra Schwartz was an amazingly nice person and didn't deserve this shit. https://t.co/NaXYJn6FQw

Staff at #MaimonidesSchool lower flag to half staff in honor of former student killed in #Israel. #7News pic.twitter.com/W1jhMk7J0s

Meanwhile one of Schwartz’s friends, Aryeh Sunshine, wrote on Facebook after the shooting:

Everyone please pray for my friend Ezra Schwartz who was shot by a terrorist and is in critical condition. Everyone please say tehillim and pray that this madness should end.

Later, after the news came that Schwartz had died, Sunshine wrote a longer, moving, tribute to his slain friend:

That message was accompanied with this photo of the two together:

Even Republican presidential candidate Ted Cruz weighed in on the killing of Schwartz writing “Another strain of the radical Islamic terrorism that struck Paris murdered American Ezra Schwartz in Israel today.”

The Anti-Defamation League released a statement after the death of Schwartz was announced saying:

Today’s tragic murder of 18 year old Ezra Schwartz from Sharon is heartbreaking. Our community lost a family member and we collectively mourn this senseless loss of life.Our hearts and prayers go out to the Schwartz family, to Ezra’s Maimonides School community, his Camp Yavneh family, and the Sharon Community. The rejoining of Hamas leaders at his killing is repugnant and a reminder that their sole interest is to incite hatred and violence towards Jews. “We mourn all those lost in today’s tragic attacks, and will remain steadfast in our support for the people of Israel during this ongoing wave of terrorism.

4. Hamas Officials Have Rejoiced at the Killing of Schwartz

A spokesman for Hamas, Hussan Badran, praised the attack calling it “an act of bravery” against “Zionist settlers.” That attack came just hours after a stabbing in Tel Aviv at an office building where two people were killed. The Times of Israel quotes that suspect’s mother speaking of her pride in her son’s actions.

Since October 1, 17 Israelis have been killed while 82 Palestinians have died at the hands of the IDF during the same time period. Of those 82, Israel says 52 were attackers, reports the Daily Telegraph. The Telegraph reports Israeli PM Benjamin Nethanyahu saying it’s “blindness and hypocrisy” that stops people from condemning attacks as vehemently as the Paris Terrorist Attacks were denounced.

5. Schwartz’s Death Came on the Same Day That an Israeli Cop Avoided Jail After Beating a Palestinian-American Teenager

Palestinian President Mahmoud Abbas (R) stands with Tariq Khdeir as he meets with family members of Khdeir in the West Bank city of Ramallah. (Getty)

On the day of Schwartz’s death, the Times of Israel reported that a police officer, who was found guilty of beating a Palestinian-American 15-year-old named Tariq Abu Khdeir, avoided jail. The unnamed officer received 45 days community service and a four month suspended prison sentence.

A U.S. State Department Spokesman criticized the ruling saying, “We were disappointed to hear that the police officer who severely beat American teenager Tariq Abu Khdeir in July of 2014 was spared prison time by an Israeli court yesterday.” The teen’s lawyer, Mohammad Mahmoud, called the ruling “extremely light” and that it gave police a “free hand.” 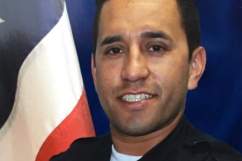