Mathematician, logician and philosopher George Boole is being honored with a Google Doodle on what would be his 200th birthday. (Google)

George Boole, a British mathematician, logician and philosopher whose work served as the basis for modern computer science, is being celebrated with a Google Doodle on what would have been his 200th birthday.

Boole, who was born November 2, 1815, in Lincoln, England, and died December 8, 1864, in County Cork, Ireland, is best known as the author of The Laws of Thought and inventor of Boolean algebra.

“His legacy surrounds us everywhere, in the computers, information storage and retrieval, electronic circuits and controls that support life, learning and communications in the 21st century,” GeorgeBoole.com, a University College Cork website dedicated to him, says. “Boole laid the foundations of the information age. His pivotal advances in mathematics, logic and probability provided the essential groundwork for modern mathematics, microelectronic engineering and computer science.”

Here’s what you need to know about Boole:

1. He Has Been Called the ‘Father of the Information Age’

Boole is known as the “father of the information age” because of his contributions to modern computer science through his invention of Boolean algebra. His theories were published in the 1854 book An Investigation of the Laws of Thought.

Boolean algebra applied algebra to the field of logic, centering on the idea that statements are true or false according to a Financial Times article about Boole. Conrad Wolfram explains in the article:

There is an appealing simplicity about true versus false, and it is this characteristic that makes Boolean algebra so useful for computer engineers, who can work in ‘on’ and ‘off’ rather than exact voltages with all their variability. Boole’s logic predicts what happens for each of these binary states.

What is so unexpected is that ‘true’, ‘false’ and a few simple logical operations such as ‘and’, ‘or’ and ‘not’ can be combined to make an equation that can add, multiply, compare, remember and much more. Indeed 80 years later Alan Turing — the British mathematician who developed the first electronic computer — would prove you needed only these simple operations to compute anything (if it was at all computable). From the great simplicity of base logic, we have built the most complex of machines.

“Is George Boole important? I guess, no George Boole, no Google, no Amazon, no Intel … that makes him pretty important,” says Lord David Puttnam, who produced the film The Genius of George Boole.

2. A Shoemaker’s Son, He Became a Teacher at the Age of 16 Despite Lacking a Formal Education

Boole was born in Lincoln, England, as the son of a shoemaker, John Boole, and Mary Ann Boole, a lady’s maid, according to GeorgeBoole.com. He had little formal education, but used his intelligence to become his family’s breadwinner at the age of 16, teaching classes at a school in his hometown.

Boole established his own school in Lincoln at the age of 19.

In 1849, Boole moved to Ireland to become the first professor of mathematics at Queen’s College in Cork (now University College Cork).

Boole married Mary Everest in 1855. She contributed to Boole’s work through editing and attending his lectures, and also tutored students. After her husband’s death, she worked to promote his work, and wrote educational books using his principles.

Alicia Boole was also a mathematician, and Lucy Everest Boole was the first female professor of chemistry in England. Ethel Poole, who marreid Polish scientist Wilfrid Voynich, was the author of the novel The Gadfly. 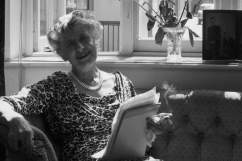 Boole died at the young age of 49 while he living in Ireland. He became ill with pneumonia after being soaked in a rainstorm while walking to class and then teaching in his wet clothes, GeorgeBoole.com says.

“On 24 November he had walked about three miles from his home to the university in pouring rain. He conducted the lecture he was so anxious not to miss in wet clothes and immediately developed a feverish cold. His weak constitution offered little resistance and his lungs rapidly became infected. But as a believer in the relatively new discipline of homeopathy, Mary Boole held very unorthodox medical beliefs. By putting her husband to bed and drenching him in water she may have unwittingly hastened his early death,” the website explains.

He is buried at St. Michael’s Church of Ireland in Blackrock, County Cork.

5. He Was the Inspiration for Professor Moriarty, Sherlock Holmes’ Nemesis

“Moriarty was a professor at a small provincial university. He was a mathematician,” MacHale told Evoke.ie. “If you look at the mathematical papers that Moriarty wrote, they can be linked almost directly with half a dozen of the papers that George Boole wrote.”

MacHale says author Arthur Conan Doyle using Boole as a basis for the character was a sort of “backhanded tribute.” According to MacHale, Doyle learned about Boole through the author H.G. Wells, who connected him to Boole’s wife, Mary.

MacHale hopes the Moriarty connection will help introduce Boole to a larger audience.

Loading more stories
wpDiscuz
5
0
Would love your thoughts, please comment.x
()
x
| Reply
George Boole, a mathematician, logician and philosopher, is being honored with a Google Doodle on his 200th birthday. Find out more about him here.