Johnny Fratto, a regular and fan favorite on “The Howard Stern Show” passed away early this morning after battling lung cancer. Fratto, also known as a “Mafia Guru” according to his Twitter bio, was the son of mob guy Louis Fratto.

@JOHNNYFRATTO was a great man,father and friend. All the ball busting he did he loved Eric so much and I'm so sad they are both gone. #RIPJF

Here’s what you need to know about Fratto:

1. His Stint on Howard Stern Wasn’t His Only Gig 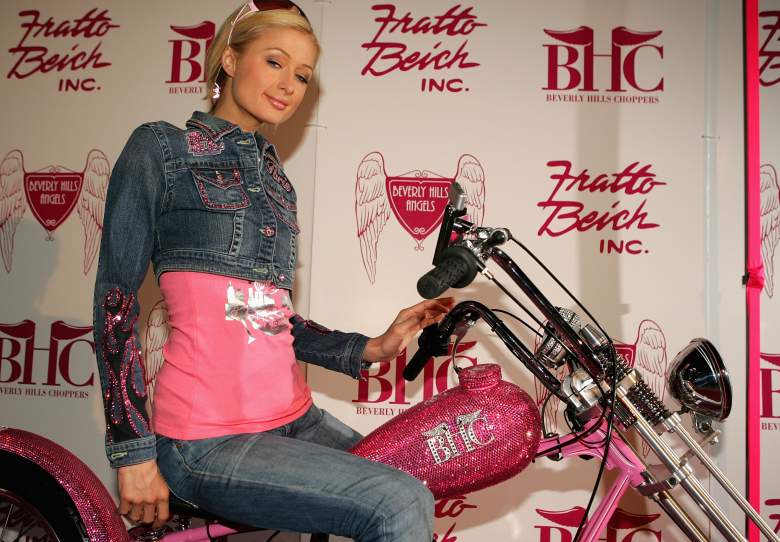 Paris Hilton receives a $250,000 Beverly Hills Chopper at Johnny Fratto’s residence. She was a close friend to Fratto. (Getty)

Besides appearing on Howard Stern, he is also the owner of Beverly Hills Choppers, according to TMZ.

When asked about how he compares to other companies like Orange County Choppers, Fratto said:

They are building motorcycles, I am building scooters — in no way shape or form do I belong in a category with them. You can compare my product to a Vespa [scooter] on steroids.

Fratto also talks about his friendship with Paris Hilton, who has a personlized Beverly Hills Chopper’s scooter. The company has also made bikes for Nicole Richie, Nikky Hilton, Adrianne Curry, Nicole Eggert.

“Paris is the nicest person that ever walked on the face of the earth. It makes me feel bad when people pick on her. She’s very generous and a good friend. Her and her friends treated us with kindness and respect. She’s a good person, everyone should have a friend like her.”

2. He Passed Away Peacefully Despite His Battle With Cancer

He passed away peacefully surrounded by family, including his wife, Ivanka, according to Celebrity News Insider. It is not known how long he had been battling cancer and if he had any treatments.

Fratto’s son Johnny Fratto Jr. is an actor, according to US Weekly.

Fratto’s brother, Frank, died in a plane crash with Rocky Marciano, an American boxer, in 1969.

3. His Father Was In The Mob and Fratto Considered Himself The “Paris Hilton of The Mafia”

Johnny Fratto, a regular on “The Howard Stern Show” died surrounded by after battling cancer. (Facebook)

His father, Louis Fratto, is a famous Chicago mob member. “[Louis]was not a master criminal. He was no more than a second or third operator from the lower ranks of the Capone mob in Chicago,” according to Crime Magazine. His father also went by “Cockeyed Louie” and “Lew Fratto.”

According to a reporter who was familiar with Fratto at the time said to Crime Magazine:

The tentacles of Lew Farrell reach into the Des Moines Police Department to promote his friends; into the Sheriff’s Office for a gun permit; into the Prosecutor’s Office to kill a criminal indictment; into the local courts to manipulate decisions on evidence; and into the state political arena.

When asked in an interview about being connected to the mob Fratto said,

It’s part of my heritage and part of my pedigree. It’s something that existed before I existed. I been around all of that and read about it before the time I was a little kid. I know guys that are “real guys”, I know guys that pretend to be real guys… it’s all the same: there’s good people and there’s bad people. I don’t believe it exists the way people believe it exists anymore. Maybe 25 years ago it was like that, but I think it’s still pretty much over… I am the Paris Hilton of the mafia, I haven’t done anything, yet somehow I seem to be the guy that’s always in the light.

I am so sorry and so sad to inform everyone that my friend Eric "The Actor" Lynch passed away yesterday afternoon!!! pic.twitter.com/6aH9LdFEWW

“The Howard Stern Show” lost another regular just last year. Eric “The Actor” Lynch died a tthe age of 39 last September. Fratto was his manager and long-time friend, according to Variety.

Fratto said in an interview that he wasn’t Lynch’s manager but just a friend who guided him.
“No, just his friend. Someone looking out for him – I enjoy helping Eric out and he really is a good kid. He isn’t what people think he is… the ungrateful part.”

Lynch was three feet tall, and used a motorized wheelchair for transportation. He updated the fans on the show frequently about his many health conditions, but he claimed he outlived doctors’ predictions on his life expectancy. He was best known for yelling at Howard Stern when he called into the show and became part of Stern’s “Wack Pack,” an assortment of personalities heard on the show that the show became notable for. Lynch also had a few gigs on television including guest spots on “Fringe,” “In Plain Sight” and “American Dreams,” according to Variety.

5. He Wrote a Book About The Mafia

His book titled, Would You Read This Book if I Threatened to Kill You? talks about his life as a Midwest Mafia prince.

It was published by Harper Collins in 2012 and co-written with Matthew Randazzo.

Fratto says he knows a lot about mob movies and probably knows the Godfather by heart. His favorite is Thief.

Thief with James Caan. It was the most realistic. I like all them movies. I watch Goodfellas and Casino and Godfather obviously. I probably know every line to The Godfather.

But his true passion and source of adrenaline was with “The Howard Stern Show.” Fratto talks about the feeling he would get as he called into the show.

Something really challenging for me… weird thing as a caller, when you’re dialing that number, you’re gonna say something and they’re gonna put you through to Howard — there’s an element I can’t explain to you. It’s like your first kiss with a girl – either gonna go along with it, or gonna get shut down. It’s adrenaline – I love it. I don’t try to wear it out, either. Unless I feel like I got something to say, I don’t really call.

Loading more stories
wpDiscuz
0
0
Would love your thoughts, please comment.x
()
x
| Reply
Johnny Fratto, a regular on "The Howard Stern Show" died today after a battle with lung cancer at the age of 61.