Katerra Lewis is charged with manslaughter after an 8-year-old boy beat a toddler left in his care by Lewis to death, police say. (Birmingham Police)

An Alabama mother has been charged with manslaughter after her 1-year-old daughter was beaten to death last month by an 8-year-old boy left to take care of the baby, police say.

Katerra Lewis, 26, of Birmingham, was arrested this week, Al.com reports. The 8-year-old boy, who is not being identified because of his age, has been charged with murder, according to police.

Lewis and a friend left her daughter, the boy and four other young children home to go to a club, police said.

“It is believed that while the mother and friend were at the club, the 8-year-old viciously attacked the 1-year-old because the 1-year-old would not stop crying,” Birmingham Police spokesman Lieutenant Sean Edwards said at a press conference. “The 1-year-old suffered from severe head trauma as well as major internal organ damage which ultimately led to her death.”

Edwards said the case is “by far one of the saddest cases that I’ve witnessed and been a part of.”

1. Lewis & Her Daughter Were Living at the Friend’s House

Kelci Divine Lewis, who turned 1 in May, was found unresponsive on the morning of October 12 in her crib at the home of Lewis’ friend, police told Al.com.

Police were called at about 10:45 a.m., and Kelci was taken to a local children’s hospital, where she later died.

Family members said Lewis and her daughter were living with the friend while they waited to be approved for Section 8 housing.

There were four other children in the home, ages 2, 4, 6 and 7. Kelci was Lewis’ only child. The other children were removed from the home by the state.

2. Family Members Say There Was Another Adult at the House When Lewis Went to the Club

Kelci Lewis’ grandmother, Waynetta Callens, told Al.com there was another adult at the home when Katerra Lewis and her friend left to go to the club.

“Katerra is not the type of parent that they are trying to portray her as,” Callens told Al.com. “We all will have our day in court. Never judge a book by its cover, which means don’t try to judge from the outside.”

“People are already talking, I know they are. If you don’t know the real story, keep your mouth closed because you don’t know what happened,” Callens said.

Lewis posted on Facebook after her daughter’s death, writing, I’m still in shock over it all I willenver forget u I will nevr stop luving u there will never be another Kelci Lewis in dis world dat make me feel like u did ima miss seeing dat pretty smile hearing ur voice calling myu name non step hear dem lil feet running around da house baby girl ur missed ur loved … i juz wanna kno y dey took u from me not only did dey hurt me by taken u but our hole family and real friends r hurt.”

She also started a GoFundMe account to help pay for Kelci’s funeral. The account raised more than $1,000 before it was shut down. She has since shut down her Facebook page.

4. Kelci Was Born Premature & Was the Family’s ‘Miracle Baby’

Kelci’s grandmother, Waynetta Callens told WIAT-TV that the girl was born premature and was the family’s “miracle baby.”

“She grew to be this happy adorable lovable cheerful talkative baby that everyone grew to love,” Callens told the news station at a vigil held a week after the baby’s death.

Katerra Lewis attended the vigil, but did not speak, the news station reported.

“Words cannot express the way my daughter and myself feel along with the family,” Callens told WIAT. 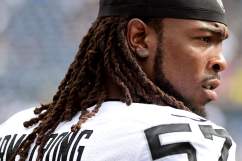 5. Lewis Has Been Released on Bond & the Boy Remains in State Custody

Lewis was released from custody after posting $15,000 bail, police said.

The boy is in the custody of the state Department of Human Resources.

“There are just too many deep rooted issues in this horrific crime. It’s extremely troubling from so many different angles and there are no law enforcement answers to prevent it,” Birmingham Police Chief A.C. Roper told Al.com. “We’ve been concerned about the kids and the future effect on their lives. The bottom line is an innocent young baby lost her life and that should be a wake-up call for our community.”