A police report shows that a University of Missouri police officer and residential life staffers witnessed a swastika scrawled in feces in a bathroom in a Mizzou dormitory.

You can read the report above. It was obtained Wednesday by the Daily Caller through a Freedom of Information Act request.

The “poop swastika” was one of a series of racially charged incidents at the Columbia campus that led to students protesting against the university’s administration. After a graduate student went on a hunger strike and black members of the football team boycotted, the university system’s president, Tim Wolfe, resigned.

Some, including The Federalist news site, questioned whether anyone had actually seen the swastika.

The swastika was found on October 24 in a third-floor bathroom in Missouri’s Gateway Hall.

There have been no arrests in connection with the incident.

The discovery of the swastika came as racial tensions were rising on campus. The controversy began in September when Payton Head, the Students Association President, said he was called a “n****r” by a group of men in a pickup truck while on campus.

On October 5, a drunk student went onto a stage where the Legion of Black Collegians was rehearsing a homecoming skit and screamed racial epithets, the Kansas City Star reports. On October 10, during the school’s homecoming parade, a group of students, called Concerned Student 1950 (a reference to the year black students were first admitted to the 176-year-old university), surrounded Wolfe’s car and demanded he speak with them. Wolfe had police remove them from the parade route, the newspaper reports.

After the swastika was found, Residential Life posted a flyer about the incident in the dorm:

I forgot to tweet this a few days ago, but here is the flyer posted throughout my dorm about the poop-swastika pic.twitter.com/bwCIoGei3U

And a letter was sent to the community by Residence Halls Association President Billy Donley:

We will not stay silent. Read the statement below from @RHAPresident pic.twitter.com/xJbPT1oIrI

The police report was released more than two weeks after the incident. 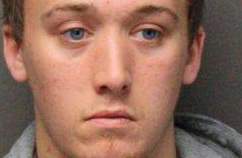 Loading more stories
wpDiscuz
11
0
Would love your thoughts, please comment.x
()
x
| Reply
A police report shows that an officer and Residential Life staff saw a swastika made out of feces found at the University of Missouri in a dorm bathroom.