A woman driver with a toddler in the car plowed onto a sidewalk on the Las Vegas strip near where the Miss Universe pageant was being held. At least 36 people were injured, including 11 adults who were taken to the hospital. One person has died. The crash was intentional but it was not terrorism, authorities are saying.

The driver has been identified as 24-year-old Lakeisha Holloway of Portland, Oregon. (Read more about her here.) During a press conference, Metro Sheriff Jeff Lombardo said it appeared that Holloway intentionally hit the pedestrians and she was very stoic after the event, not showing any emotion or distress about her actions. They’re still gathering information about her background with the help of the FBI, but believe this was not related to terrorism.

1. Witnesses Said the Woman Driver Plowed Onto a Sidewalk And Hit Pedestrians Intentionally

#breaking witness tells me this is where woman ran over crowds on strip. @KTNV white towels on sidewalk pic.twitter.com/KN7BEN6ZSl

Reports are saying that a woman driver ran onto a sidewalk on the Las Vegas strip, plowing down a group of pedestrians. In a press conference, Metro Sheriff Joe Lombardo said that videos of the incident also indicated the crash was intentional. Twitter user @fearthetribe said that a friend was near the accident when it happened and saw a car just run onto the sidewalk and hit a large group of people. They said their friend was missed by only about two feet:

Holloway was driving a 1996 Oldsmobile when she allegedly intentionally rammed her car into the crowd, according to KTNV. She had been in Las Vegas for about a week. KTNV shared the best picture they could get of the car:

This is the best shot we can get of the car @LVMPD CSI is looking at in parking lot. Damaged windshield @KTNV pic.twitter.com/JXxZcJSOLx

Close up of the suspect's vehicle used in the crash on the Las Vegas Strip pic.twitter.com/qA67shkWVV

During a press conference, Lombardo said that Holloway repeatedly drove her car over pedestrians and some people even jumped on her car, banging on it and trying to get her to stop. But she wouldn’t stop. 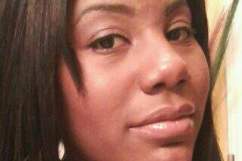 2. The Accident Was At the Las Vegas Strip Near Paris And Planet Hollywood

The Las Vegas strip was closed from Harmon Avenue to Flamingo Road, due to the accident. Police were investigating and trying to determine exactly what happened. The I-15 ramps to Flamingo Road were also closed, KTNV reported. The strip has since been reopened.

Many of the victims were from Montreal, KTNV reported, and many of them only spoke French and needed translators. One person who was on the scene, Chris Bennington, shared on Twitter that she missed him by mere feet. He said he looked right at her and she wasn’t trying to stop and she didn’t care that she was hitting people:

She wS looking straight forward, going faster down the sidewalk then traffic on the street. People were screaming, and she kept hitting ppl

Four college students from Pacific University were also among the injured. They were members of a wrestling team and were supposed to compete in a tournament in Las Vegas, Georgia Newsday reported.

3. As Many As 30 Pedestrians Were Run Down And One Person Has Died

The numbers of pedestrians who have been injured keeps changing as news reports are updated. Right now, it appears that as many as 37 people may be injured from the accident and one person died, Chief Greg Cassell said.  The person who died was Jessica Valenzuela, 32, of Buckeye, Arizona, Georgia Newsday reported. She was visiting Las Vegas with her husband. Three of the injured are in critical condition with head injuries, Lombardo said in a press conference. He said the injured included people from Quebec, Oregon, Colorado, Florida, Washington, California, and Mexico.

During the press conference, officials confirmed that Holloway left the scene and drove a few blocks to the Tuscany Casino. She exited her car, left her toddler inside, and contacted a valet parker. She told him she had run over some people on the Las Vegas strip and requested that he call 911.

4. A Toddler Was in the Car with the Driver When She Crashed Into the Crowd

Investigators now working back toward @PlanetHollywood where car believed to have jumped curb and into crosswalk pic.twitter.com/Z2fpqUOMi0

Las Vegas police confirmed that a toddler was in the car with the driver at the time of the crash, Breaking 911 reported. The three-year-old was strapped into the back of the car and has been taken to Child Haven, KTNV reported.

Police said they have ruled out terrorism as a possible motive, although they are still trying to gather more details about Holloway’s background. Early reports also said there was gunfire at Planet Hollywood, but Metro Sheriff Joe Lombardo said in a press conference that there were no gunshots.

No alcohol was found in Holloway’s system, but she may have been on some type of stimulant, 3 News reported.

5. At Least One Witness Said the Driver Sped Up And Returned to the Sidewalk to Hit More People

Investigators on scene, looks like perp vehicle may have been traveling North bound on Vegas Blvd pic.twitter.com/U9HTIXg0aD

The accident occurred on the Las Vegas strip, near where The Miss Universe pageant was being held. So far, there has been no report of a connection to the pageant.

Witnesses said they saw men running after the car and yelling at the driver, “Stop! Stop!” Everyone was frantic, but she didn’t seem to respond, Fox 13 reported.

A reporter from KTNV shared on Twitter that an employee at a nearby Mexican restaurant said that a woman driver drove onto the sidewalk, hit six people, got off the sidewalk, then sped up, returning to the sidewalk near Paris and hitting eight to 10 more people.

The Las Vegas police are now confirming that there were two different areas where pedestrians were hit, News3LV reported. They said during a press conference that Holloway shared her motivations for the crash with police, but they aren’t comfortable sharing that information with the public yet since the investigation is ongoing. They believe she was “disassociated” from the father of her child, who may be from Dallas, Texas. She may have been trying to return to Dallas via Las Vegas, but had been living out of her car in Las Vegas for a week.

Read More
5 Fast Facts, Breaking News, Crime, Las Vegas
A car plowed into a group of pedestrians in Las Vegas near the Miss Universe pageant, sending 30 or more to the hospital.