The debate was hosted by moderators Wolf Blitzer, Dana Bash, and Hugh Hewitt.

Watch it all above. 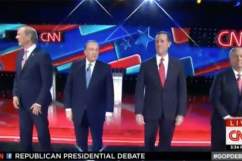