For all the talk about Donald Trump's polling dominance, which has ended the campaigns of several would-be contenders and even led to talk of a brokered convention, there's a long way to go until anyone actually casts a vote in the Republican presidential primary. As the guys at Fivethirtyeight and others have repeatedly pointed out, the majority of potential voters don't even start paying attention until the tail end of the primary campaign, leading to surges like those pulled off by John Kerry in 2004 and Rick Santorum in 2012. So what to make of the GOP field heading into Tuesday night's debate? There's a lot going on here. Analysts — and bettors, whose actions are often a better indicator of what's really happening than popular media narratives — have been very skeptical about Trump's chances of being the GOP nominee. But while some of the GOP candidates are more viable nominees than others, no one candidate is as good as even money to win either the first-in-the-nation Iowa caucus or the nomination. The betting markets are still the most bullish on Marco Rubio, but Ted Cruz — who surged to a 10-point lead over Trump in the most recent DesMoines Register — is looking more and more like a viable nominee. The opposite is true of Jeb Bush, whose favorability ratings in Iowa and elsewhere have actually dropped over the past several months despite an unrivaled binge of ad spending. How strong are the positions of Rubio, Cruz and Trump? Where do the rest of the candidates stack up? The betting markets monitored by Predictwise provide a good snapshot of the race. Click right for a breakdown of where each candidate stands. (Getty) 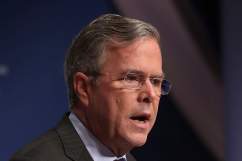