A video showing the SFPD aiming their guns at man before shooting him in San Francisco’s Bayview District was caught on camera and shared on Instagram by daniggahot. You can watch the video above.

Shortly after 5 p.m., San Francisco police spokesman Sgt. Michael Andraychak said that the suspect was injured in the shooting but that no further details are being released at this time.

Police did not provide details as to what led up to the shooting.

In the video, a man can be seen caught against a wall as at least eight officers stand feet away with their guns drawn. Someone is yelling, “Drop it, please!” The man ignores the request and begins to walks away. Gunfire is then heard. The person filming ducks for cover, apparently having been a passenger on a bus. 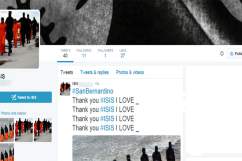 Is ISIS Behind the Inland Regional Center Shooting?

Loading more stories
wpDiscuz
13
0
Would love your thoughts, please comment.x
()
x
| Reply
A video showing the SFPD aiming their guns at man before shooting him in San Francisco's Bayview District was caught on camera and shared on Instagram.