A group of armed anti-government protesters have taken over a federal building on a national wildlife refuge in Oregon. They are protesting against the pending imprisonment of two ranchers, Dwight and Steven Hammond, who were convicted of burning federal land.

The men are led by Ammon Bundy, the son of Nevada cattle rancher Cliven Bundy, whose family were engaged in a standoff in April 2014 with the federal government as part of a decades long dispute with the Bureau of Land Management over grazing rights.

Bundy and the other men, including his brother, Ryan, took over the Malheur National Wildlife Refuge building Saturday night following a peaceful protest in Burns, which is in the rural eastern Oregon county of Harney.

It’s not known how many armed men are at the federal building. Initial reports said there were as many as 150 militia members, but others have said there are about a dozen men. Ammon Bundy told The Oregonian he would not specify how many men are there for operational security reasons.

1. Bundy Called for Other Patriots to Come to Oregon & Says They Could Occupy the Land for Years

Ammon Bundy posted a Facebook video on Saturday, calling for others to come to Oregon to join him and his men.

“Calling all freedom loving people to come to Harney County Oregon, come to the Malhuer Wildlife Refuge. The people are finally getting some good use out of a federal facility,” he said in the caption of the video. In a previous video, Bundy called for “all patriots” to “stand up not stand down” and “come prepared.”

Bundy told The Oregonian, “The facility has been the tool to do all the tyranny that has been placed upon the Hammonds. We’re planning on staying here for years, absolutely. This is not a decision we’ve made at the last minute.”

2. There Were No Government Employees at the Reserve When Bundy & the Other Men Arrived

The FBI has said they are aware of the takeover, but have not commented further. There were no government employees at the Malheur National Wildlife Refuge when Ammon Bundy and the other men arrived.

“After the peaceful rally was completed today, a group of outside militants drove to the Malheur Wildlife Refuge, where they seized and occupied the refuge headquarters,” Harney County Sheriff Dave Ward said in a statement. “A collective effort from multiple agencies is currently working on a solution. For the time being please stay away from that area. More information will be provided as it becomes available. Please maintain a peaceful and united front and allow us to work through this situation.”

The Malheur Wildlife Refuge is operated by the U.S. Fish & Wildlife Service. According to its website, the refuge was established in 1908 by President Theodore Roosevelt as the Lake Malheur Reservation:

Roosevelt set aside unclaimed government lands encompassed by Malheur, Mud and Harney Lakes ‘as a preserve and breeding ground for native birds.’ The newly established ‘Lake Malheur Reservation’ was the 19th of 51 wildlife refuges created by Roosevelt during his tenure as president. At the time, Malheur was the third refuge in Oregon and one of only six refuges west of the Mississippi.

The refuge now encompasses 187,757 acres of wildlife habitat. The 65,000 acre Blitzen Valley was purchased in 1935 and added to the refuge to secure water rights for Malheur and Mud Lake. With the creation of the Civilian Conservation Corps (CCC) in 1933, the refuge was able to use this additional manpower in 1935 to begin major improvements on the refuge. The CCC constructed most of the infrastructure in the Blitzen Valley including the Center Patrol Road which travels through the center of the refuge. The 14,000 acre Double-O unit was added to the refuge in 1942 and provides important shorebird habitat, as well as waterfowl nesting areas. Malheur Refuge is situated within the Harney Basin in southeastern Oregon. Located in the Northern Great Basin, this portion of the State is lightly populated, generally arid with cold winters, and characterized by wide open spaces.

The refuge said in a statement on its Facebook page, “The Refuge will be CLOSED until further notice.”

According to reporters at the refuge, there is no law enforcement present. 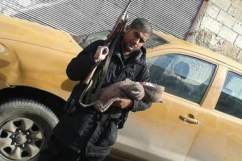 3. The Hammonds Say the Bundys Do Not Speak for Them & Plan to Report to Prison

Dwight Hammond, 73, and his son, Steven, 46, the Oregon ranchers at the center of the protest, rejected the Bundy federal building takeover, according to CBS News.

They are expected to report to prison Monday to begin serving their sentences. “Neither Ammon Bundy nor anyone within his group/organization speak for the Hammond Family,” their attorney, W. Alan Schroder, told KOIN

The Hammonds were convicted of setting fires in 2001 and 2006 on federal land to reduce the growth of invasive plants and to protect their property from wildfires, CBS News reports. They were convicted of the arsons three years ago and both served prison time. Dwight served three months and Steven served one year. Federal prosecutors appealed the sentence, saying the mandatory minimum of five year was appropriate for arson. An appeals court agreed and after the Supreme Court declined to hear the case, the Hammonds each received five year sentences in October, minus time served.

The sentences led to peaceful protests from local residents, and attracted the attention of the Bundys and other anti-government protesters, who came to the region. Bundy said he tried to get a group of local residents to join them in their occupation, but they declined.

About 300 local residents and other supporters gathered Saturday with the Hammonds, and then some, led by the Bundys, went to the refuge. 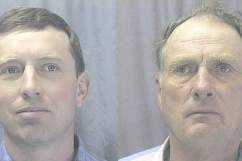 4. The Men Say They Are Willing to Fight & Die for the Cause

This is as close as I was allowed to get to the armed militia occupying the Malheur Wildlife Refuge HQ. #burnsoregon pic.twitter.com/DPztu0VsVU

Ammon’s brother, Ryan, told The Oregonian the group is demanding the Hammonds be released from their prison sentences. They are also asking the federal government to relinquish control of the Malheur National Forest to local residents. He said many of the men at the refuge are willing to fight and die to protect the rights of states, counties and individuals to manage local lands.

"I didn't come here to shoot I came here to die."#bundymilitia, (will ID only as "Capt. Moroni") pic.twitter.com/sh83SfWTll

Ryan Bundy told the newspaper, “The best possible outcome is that the ranchers that have been kicked out of the area, then they will come back and reclaim their land, and the wildlife refuge will be shut down forever and the federal government will relinquish such control,” he said. “What we’re doing is not rebellious. What we’re doing is in accordance with the Constitution, which is the supreme law of the land.”

In a video posted to Facebook by a local resident, which you can watch above, two of the armed men explained their cause.

Another man said, “This is the power of America right here. People got together for this and it doesn’t have to stop here. This could be a hope that spreads through the whole country. Everybody’s looking for this hope because the government has beat us, oppressed us and took everything from us. They will not stop until we tell them no.”

Ammon and Ryan Bundy assisted their father, Cliven Bundy, and other protesters during a tense standoff with the federal government in April 2014. During that standoff, some of the militamen who joined the Bundys pointed loaded weapons at federal agents.

The dispute between the BLM and the Bundys began in 1993, when Cliven Bundy declined to renew his grazing permit with the BLM in protest of new rules, but continued to graze his cattle on federal lands without a permit. In March 2014, the federal land was closed so that BLM officials could seize the Bundy’s cattle. On April 5, the roundup began, and on April 12, the armed protesters showed up.

The Bureau of Land Management decided to release the family’s cattle to de-escalate the situation. 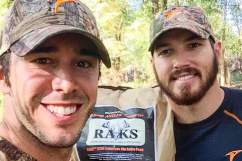