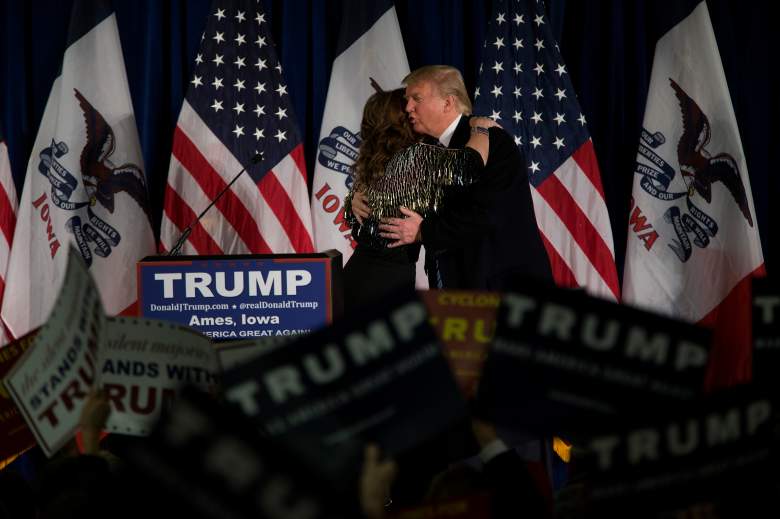 Donlad Trump hugs Sarah Palin at a campaign event where he announced her endorsement. (Getty)

There are only 10 days until the Iowa caucus, and the campaign trail is heating up. Two new Iowa polls show conficting results: one favors Ted Cruz, the other Donald Trump, each by a small margin. Marco Rubio, once a solid third in Iowa and the longtime New Hampshire runner-up, is fending off a challenge from Ben Carson in Iowa and continues to slip in New Hampshire polls, including the latest. Trump retains the New Hampshire lead despite surges from John Kasich and Cruz in polls released Wednesday and Thursday, respectively. Trump also holds the national polling lead.

The first two Iowa polls after Sarah Palin’s endorsement of Trump (seen above) and Iowa governor Terry Branstad’s announced opposition to Cruz, and showed conflicting results. Loras College gives Trump a 1-point lead over Cruz, 26 to 25 percent, with Rubio taking 13 and Ben Carson 8. KBUR shows Cruz with a 2-point lead, 27 percent to 25, with Carson taking 11 and Rubio 9. This is discouraging news for Rubio: long a distant third in Iowa, he’s now at risk of sliding past Carson for fourth.

The RealClearPolitics averages show Trump with a 1.5-point lead over Cruz at 27.9 to 26.4 percent, with Rubio running third at 11 percent and Carson fourth at 8.9.

FiveThirtyEight, which takes more than polls into account for its “polls-plus” forecast, shows Cruz with a 52 percent chance of taking Iowa, up from 51 percent despite the endorsements, which weigh heavily in the model. Trump rises to 31 percent, with Rubio falling to 10. The polls-only forecast, which weights polls based on methodology and past accuracy, favors Trump with a 44 percent chance, compared to 42 for Cruz and single digits for everyone else.

The betting markets as aggregated by Predictwise have never been closer in Iowa. Cruz drops to 49 percent, while Trump rises to 43, with Rubio taking 4 percent and Carson at 2.