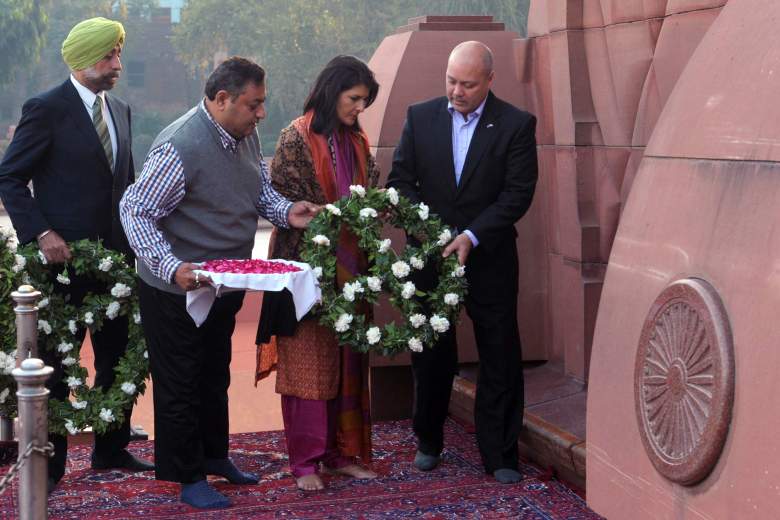 Michael and Nikki Haley lay a wreath at a Sikh memorial in India. (Getty)

Michael Haley is a captain in the South Carolina Army National Guard and the First Gentleman of South Carolina, having married Governor Nikki Haley in 1996. He is a combat veteran, deploying to Afghanistan while she was in office. Together they have two children, Rena and Nalin.

Though Michael eventually graduated from the University of North Carolina at Charlotte, the first couple met at the governor’s first weekend at Clemson University, where she eventually received a Bachelor’s degree in accounting. The couple married in 1996 and have two children, Rena and Nalin.

The Haleys continue to follow Clemson sports closely, and watched Clemson football’s appearance in the College Football Playoff National Championship Game while Nikki prepared for her State of the Union response. Michael’s social media also shows a strong love for the Tigers:

2. The Haleys Were Married in Both Christian and Sikh Ceremonies 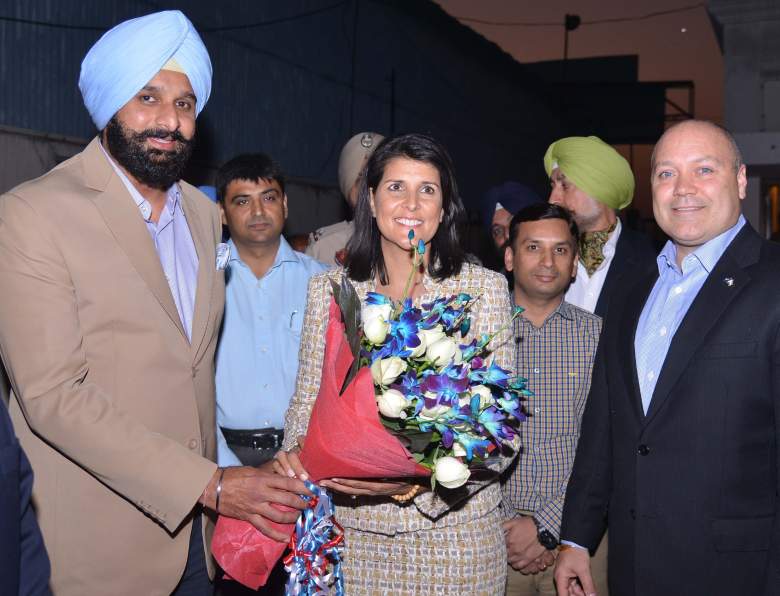 Michael and Nikki Haley greet officials in India, where the governor’s parents were born. (Getty)

The governor, who was born Nimrata Nikki Randhawa to Ajit Singh and Raj Kaur Randhawa, was raised a Sikh. The Haleys performed wedding ceremonies in both a Methodist church and a Sikh gurdwara, literally translated as “gateway to the guru.”

She identifies as a Christian today, and they Haleys raise their two children as such, but continues to participate in Sikh culture, as when she spoke at a new gurdwara in 2013, seen below:

Haley, seen above returning from a deployment to Afghanistan, serves as a captain in the 3-49th Agribusiness Development Team. The mission of the team while in Afghanistan was to convert Afghan farmers to food and textile crops from growing poppies, the raw material for opiates like heroin, and thus cut the Taliban’s drug trafficking revenue. During their tour, Haley asserts that the convoy he was riding in was hit by IEDs twice, but that no one was seriously injured.

In addition to his federal service, Captain Haley was until 2015 in full-time service with the South Carolina National Guard, serving in several administrative capacities with the Department of Defense. Haley has left full-time National Guard service but continues to serve part-time in the Guard.

4. The Haleys Have Faced Affair Allegations

The Haleys, seen here in a family photo, have consistently denied allegations of affairs. (Facebook)

In 2010, blogger and former Haley campaign advisor Will Folks submitted a sworn statement to a local anti-Haley conservative group in which he alleged that he and Governor Haley carried on an affair in 2007, while she was a state representative. A Haley campaign official called his evidence, including dozens of text messages between Folks and the campaign manager, typical of a political campaign:

This blogger’s overactive imagination has gone into overdrive. South Carolina politics is full of rumors and innuendo, and of course our campaign did everything in our power to prevent false rumors about Nikki from airing out in the media as they now have. Every campaign would have done exactly the same thing.

Also in 2010, lobbyist Larry Marchant, also a consultant to rival Andre Bauer, claimed he and Haley had a one-night stand. Haley also denied this, and Marchant admitted he had no hard evidence. 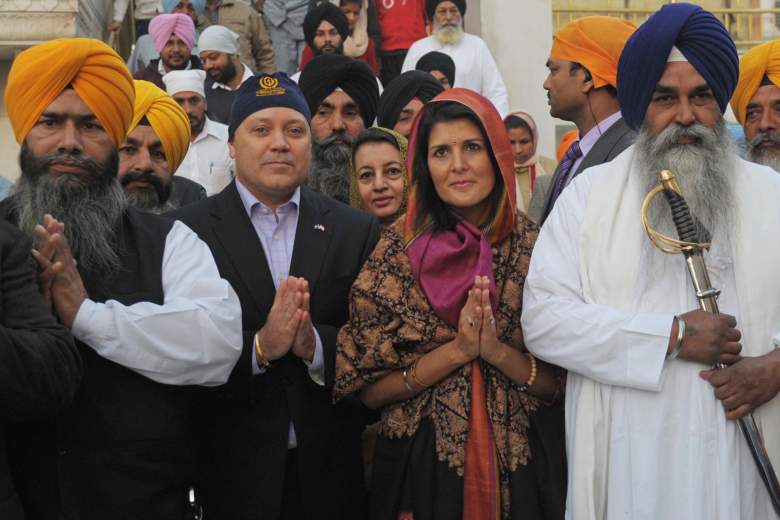 The Haleys, seen here in traditional Sikh garb during a visit to India, often participate in Sikh cultural celebrations. (Getty)

Michael and Nikki Haley still participate in cultural events related to her Sikh heritage, but a misstep by a Sikh cleric caused a small uproar during a 2014 visit to India.

Devout Sikh men are required to carry a kirpan or sari sahib, a ceremonial blade, at all times, as one of the five elements of the kakar dress code. It can take the form of a welded-sheathed blade of a few inches or a three-foot sword. A Sikh granthi, or reader of the sacred text, is especially expected to uphold kakar. However, during a visit to the Golden Temple in India, one of the holiest sites in Sikhism, the granthi handed his sword to Haley after the couple requested a blessing. While Haley was not found to have done anything wrong, Sikh scholars condemned the move as a grave violation of Sikh tenets.

Loading more stories
wpDiscuz
6
0
Would love your thoughts, please comment.x
()
x
| Reply
Michael Haley is the husband of South Carolina Governor Nikki Haley, who will give the Republican response to Barack Obama's final State of the Union address.