A New York priest says he became crack addict after his sister was decapitated by his nephew. On January 6, Father Robert Lubrano, 63, was arrested in Long Island for allegedly trying to buy crack cocaine from a Bronx man named as Michael Oyola, 32. The pair were both arrested at the Bethpage Motel on the Hempstead Turnpike. When he was taken into custody, police say they found drugs and a crack pipe on Lubrano.

In October 2014, Lubrano’s sister, Pat Ward, 66, was murdered by her son Derek in Farmingdale, New York.

1. Police Say Lubrano Immediately Told Them ‘I Have Been Smoking Crack Cocaine Ever Since My Sister Was Murdered’

According to Long Island News 12, Lubrano was caught by officers who were in the area investigating a separate incident. An officer said in court on January 6 that he saw Lubrano exchanging money with Oyola in the parking lot of the Bethpage Motel. When cops went to investigate further, they found 800 milligrams of a “white/yellowish rock-like substance,” reports the New York Daily News. The paper says that cocaine was also found in Lubrano’s 1998 Toyota.

2. Lubrano Has Been on Leave From His Diocese

Since his sister was killed in October 2014, Lubrano has been on leave from the Diocese of Rockville Centre. A spokesperson told News 12 that recently he had been working more with parishioners again.

3. As Derek Ward Carried His Mother’s Headless Body Through the Streets, Witnesses Thought it Was a Halloween Prank

Michael Imperial, a witness who saw Derek Ward carry his mother’s headless body through the streets of Farmingdale, told the Daily News, “I thought it was Halloween hoax. There was no big splatter of blood. It looked staged.” The New York Post reports that after emerging from the apartment building with his mother’s body, Derek “kicked her severed heard about 20 feet.”

Police were called and Ward’s body was found, wearing only a bra and pants, on Secatogue Avenue in Farmingdale, just before 8 p.m. on October 28. Around 20 minutes later, Derek Ward was found dead close to tracks used by the Long Island Rail Road.

Police believe that Derek Ward suffered a psychotic episode sparked by the recent death of his grandfather. The Farmingdale Observer reported in August 2013 that a Carl Lubrano, 90, had passed away. He was described as the “proud grandfather of Derek Ward and the late Robert Ward.”

According to the New York Post, Patricia Ward worked at Farmingdale State College for 28 years. One of her colleagues, Frank Calabria, told the Post:

We are in shock. The staff in her department is teary-eyed. We are providing counseling to the staff who need it. It’s a very sad day. A lot of people are taking it very hard.

Newsday reports that cops think the son had a drug problem, which may have been a source of tension within the family. While Farmingdale itself doesn’t appear to have a major drug problem, the neighboring down of Massapequa does. The drug wars in that town have been extensively covered by the local Patch. The two towns are approximately 40 miles from New York City. 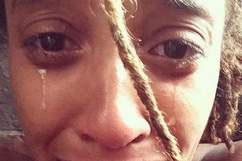