A seat is being left empty in the First Lady’s State of the Union box to remember the victims of gun violence. (White House)

The White House will leave an empty seat in First Lady Michelle Obama’s State of the Union box Tuesday night to remember “the victims of gun violence who no longer have a voice.”

President Barack Obama gave an emotional speech last week to announce a set of “commonsense steps to reduce gun violence in American and make our communities safe,” and the vacant seat is an effort to continue to put gun control in the spotlight.

“We leave one seat empty in the First Lady’s State of the Union Guest Box for the victims of gun violence who no longer have a voice – because they need the rest of us to speak for them,” the White House said in a statement. “To tell their stories. To honor their memory. To support the Americans whose lives have been forever changed by the terrible ripple effect of gun violence – survivors who’ve had to learn to live with a disability, or without the love of their life. To remind every single one of our representatives that it’s their responsibility to do something about this.”

The State of the Union will begin at 9 p.m. Eastern. Here’s how you can watch online.
Family members of gun violence victims began using #EmptySeat on Tuesday:

My #EmptySeat today & always is for my mom, Dawn, the heroic Sandy Hook principal who was killed in 2012. #SOTU pic.twitter.com/lhUhq0loa6

#EmptySeat for my best friend @ravinranta she was shot in front of her 4 yr old son by her abusive husband. #SOTU pic.twitter.com/6yw9BihVCk

#EmptySeat for @MeganBoken, shot and killed in a robbery in STL at age 23. Our hearts ache for her every day. #SOTU pic.twitter.com/mKMM8tluPj

They say she had 7/8 bullet holes. @WhiteHouse @MomsDemand how long before it's your child? #EmptySeat #SOTU pic.twitter.com/n5NgNPqhSs

My #EmptySeat. Brooklynn Mae Mohler, killed at the age of 13 by an unsecured gun in 2013. #SOTU. pic.twitter.com/PMG5VhnqQC

Tomorrow the #EmptySeat will be for our grandson Noah gunned down in Sandy Hook in 2012. I miss him every day. #SOTU pic.twitter.com/TDvttWNyjm

But some of Obama’s opponents have used #EmptySeat to criticize the president:

Where is the #EmptySeat for the 4 Americans abandoned to die in Benghazi?

#EmptySeat for the four Americans left behind to rot in an Iranian prison.

#EmptySeat for Brian Terry killed in Obama’s Fast and Furious program when he gave guns to drug cartels with no background checks.

Perhaps Obama could leave an empty seat in honor of the Bill of Rights — bludgeoned by his administration. #SOTU #emptyseat #emptysuit

How many empty seats would Obama have to leave for people killed by illegal immigrants? #EmptySeat @indyp8riot @EDinCali

#EmptySeat for police killed in the line of duty. #BlueLivesMatter 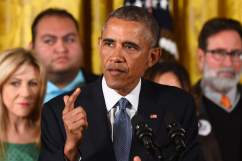