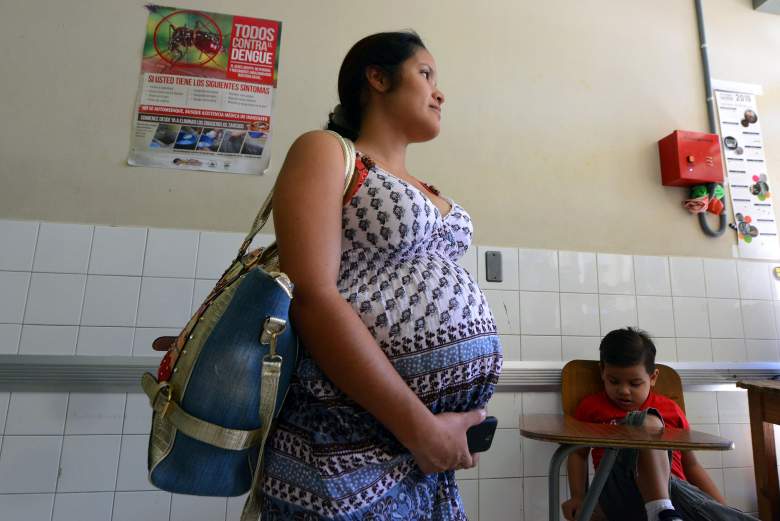 If a pregnant mom’s infected with Zika, she can pass on the virus to her baby. (Getty)

What is microcephaly, caused by the Zika virus? How big of a threat is it to pregnant women in the U.S.? The Zika virus poses a danger to pregnant women because it can lead to birth defects, especially microcephaly. Although the virus hasn’t had any active, local transmissions in the U.S. yet, it’s possible it could soon. The mosquito that transmits Zika lives in the U.S. However, the CDC thinks outbreaks will be limited.

1. Microcephaly Is a Condition Where the Baby’s Head Is Too Small 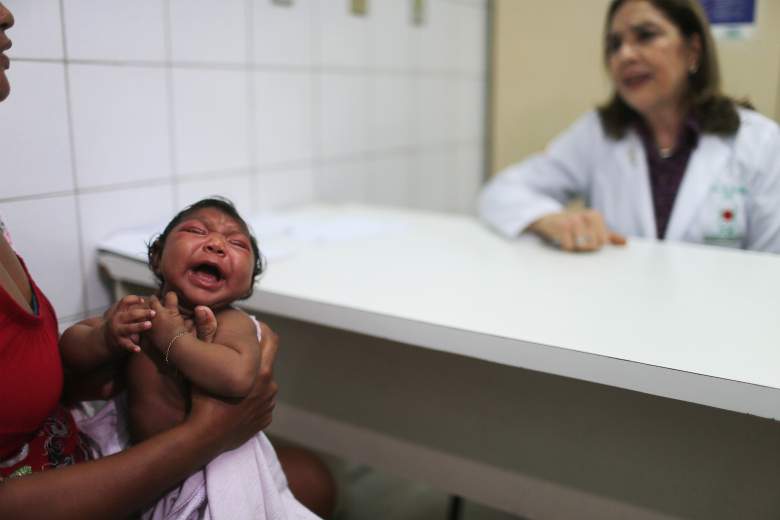 Dr. Angela Rocha (R), pediatric infectologist at Oswaldo Cruz Hospital, speaks during an examination of Ludmilla Hadassa Dias de Vasconcelos (2 months), who has microcephaly, on January 26, 2016 in Recife, Brazil. In the last four months, authorities have recorded close to 4,000 cases in Brazil in which the mosquito-borne Zika virus may have led to microcephaly in infants. (Getty)

Microcephaly is a birth defect where the baby develops an abnormally small brain and skull for its age and sex, Discovery reported. The consequences to the child include early death, stillborn births, or severe brain damage. Brain damage can leave them physically and intellectually handicapped. Babies may have trouble moving their arms and legs or sucking and swallowing, STAT News reported. If the brain damage is less severe, they’ll still deal with slow thought and impaired speech and physical movements. They may also have vision or hearing problems and epilepsy.

2. Zika Can Cause Microcephaly If It’s Transmitted From an Infected Mom to Her Baby 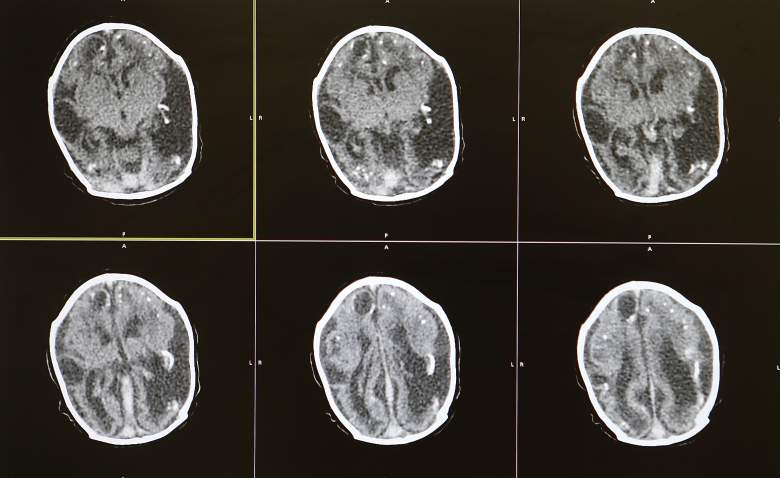 Brain scans of a 2-month-old baby with microcephaly are displayed by Dr. Vanessa Van Der Linden, the neuro-pediatrician who first recognized and alerted authorities of the microcephaly crisis in Brazil, on January 27, 2016 in Recife, Brazil. (Getty)

If Zika is transmitted from mom to baby, it can cause microcephaly. In Hawaii, a baby was born with microcephaly to a mother who was likely infected with Zika. She lived in Brazil in May 2015, Scientific American reported. Many young mothers-to-be are putting off or canceling “babymoon” trips because of the fear of contracting the disease from mosquitoes in affected regions.

It’s important to note that experts currently believe that future pregnancies are unaffected once the virus has cleared out of your system. So a woman who had the virus in the past but no longer has it doesn’t likely have a risk for future pregnancies, according to the CDC.

3. A Large Number of Cases of Microcephaly Have Been Reported in Brazil 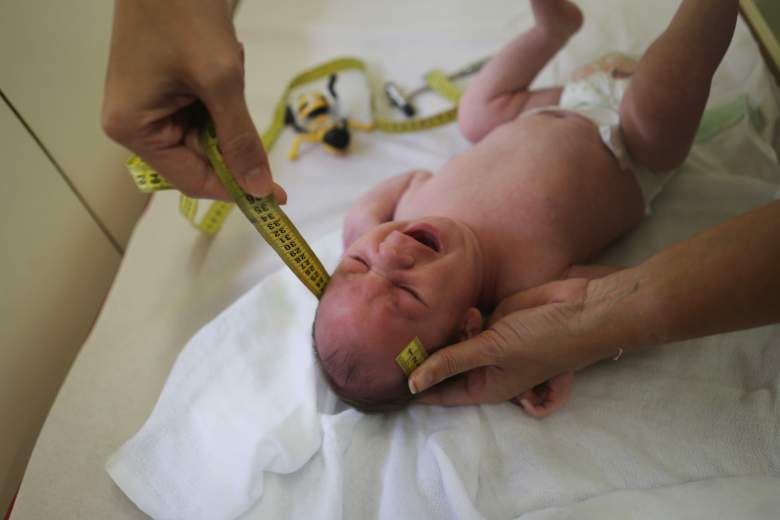 Dr. Vanessa Van Der Linden, the neuro-pediatrician who first recognized and alerted authorities over the microcephaly crisis in Brazil, measures the head of a 2-month-old baby with microcephaly on January 27, 2016 in Recife, Brazil. Microcephaly has been connected to Zika. (Getty)

Zika is spreading in Brazil, along with microcephaly. Brazil has had 400,000 to 1.4 million Zika infections in the country. Brazil has had more than 4,100 possible cases of microcephaly just since October, CNN reported. Of those, 270 have been confirmed through lab tests. Typically, the country only gets 100 to 200 cases a year, so the increase is huge. 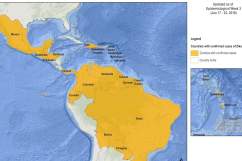 4. El Salvador Is Urging Women Not to Have Babies for Two Years 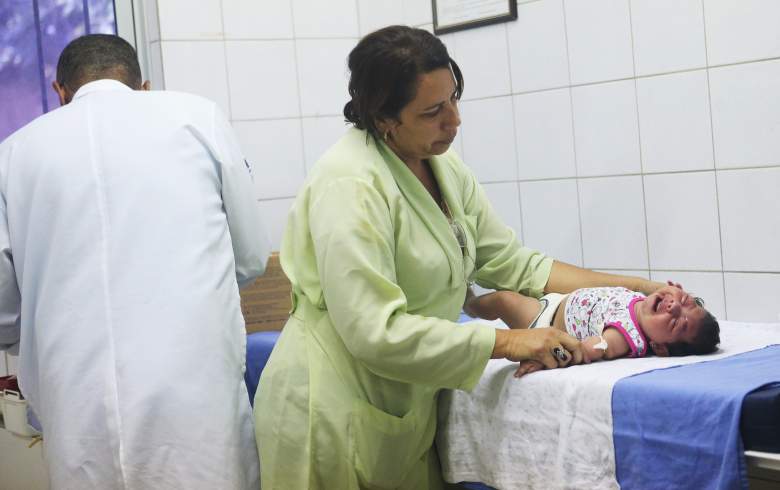 Microcephaly has been connected to Zika. (Getty)

El Salvador is so concerned about the outbreak that it’s urging women to postpone getting pregnant for two years. Health experts have said this is an overreaction, CNN reported.

5. Testing Moms for Zika Isn’t Easy And There’s No Way Currently to Prevent Transmission to the Baby 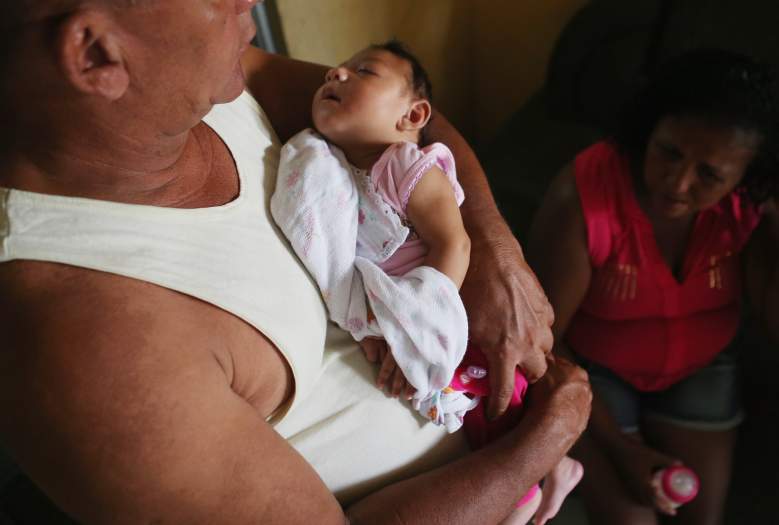 You can’t just do a quick and simple test to find out if a pregnant mom has been infected with Zika. Some moms will give a blood sample that’s sent to the CDC for testing, and the results may take 4 to 14 days, Scientific American reported. The CDC has several options. Immediately after infection, the virus is still in the blood and detectable. But that window is just a week long. After that, they have to look for antibodies in the blood. Then they must perform a confirmation test that involves exposing the blood that may have antibodies to the virus in a lab. This is to rule out false positives, since Zika is closely related to other disease like dengue and yellow fever.

Even if the mom finds out she has Zika, doctors don’t currently have ways to prevent transmission to the fetus, Scientific American reported. In some cases, such as preventing HIV from being transmitted to the baby during birth, a C-section might be performed. But it’s not known at this time if similar actions could help with Zika.

Read More
5 Fast Facts, Breaking News, Zika Virus
wpDiscuz
1
0
Would love your thoughts, please comment.x
()
x
| Reply
What is microcephaly? Are pregnant women in danger of getting Zika? Is it a danger to pregnant women in the U.S.? Find out here.