“We have sent the message that will echo from Wall Street to Washington, from Maine to California,” Sanders told his cheering supporters Tuesday night. “And that is that the government of our great country belongs to all of the people, and not just a handful of wealthy campaign contributors and their super PACs.”

“Nine months ago we began our campaign here in New Hampshire, we had no campaign organization, we had no money nad we were taking on the most powerful political organization in the United States of America,” Sanders continued. “And tonight, with what appears to be a record-breaking voter turnout, because of a huge voter turnout, and I say huge, we won. Because we harnessed the energy and excitement that the Democratic party will need to succeed in November.” 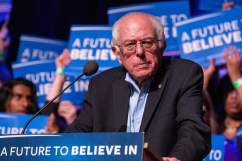 Democratic Polls for Feb. 9: State of the Race in New Hampshire & Nevada