A binary black hole is just what it sounds like: two black holes in close proximity, orbiting each other. They can be stellar black holes, which are leftover from binary star systems, or supermassive black holes that form during galaxy mergers. In 2014, it was discovered that XMM-Newton had detected two supermassive black holes orbiting one another. The detection came when X-rays suddenly fell below detectable levels and then reappeared suddenly, only to start fading again as if nothing happened, ESA reported.

In 2015, twin black holes were detected in the final stages just before merging, within a quasar that had existed 10.3 billion years ago, Astronomy Now reported. This system was also discovered because of a cycle of periodic dimming and brightening.

It’s important to note that these binary black holes were not directly observed, but rather their existence was surmised by the action of X-Rays around them. 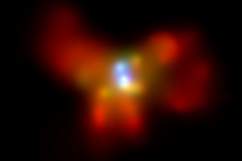 3. Two Black Holes Can Combine To Create an Even More Massive Black Hole

The idea is that LIGO experts may have discovered two black holes, 36 and 29 times the mass of the sun, colliding and merging to create an even more massive black hole that is 62 times the mass of the sun, Space reported. The acceleration of the two masses as they collide would cause a huge release of energy in the form of a gravitational wave — a ripple in spacetime. These ripples move at the speed of light. 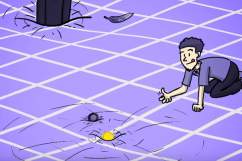 4. With Black Holes, Gravity Is So Strong That Not Even Light Can Escape

Black holes are created when massive stars burn their hydrogen fuel rapidly, accumulating a dense core of heavier elements such as carbon and oxygen over time, LIGO reported. As the hydrogen supply needed to keep the fusion process going is depleted, the core becomes increasingly dense and in danger of collapsing in on itself. Eventually the star is destroyed and part of its mass is expelled into space. Part of the star’s core isn’t expelled because it can’t escape gravity’s massive pull, so it collapses inward into an even denser object. At this point it can either become a neutron star or, if it has enough mass, it will create a black hole.

In a black hole, gravity is so strong that even light can’t escape. In fact, all that can escape is gravitational radiation, according to LIGO. These types of black holes would be 10 times more massive than the sun, but also very compact.

5. Detection of Gravitational Waves Could Confirm that Black Holes Exist

Although black holes are a widely accepted theory, they still aren’t confirmed, Nature reported. Detecting a binary black hole merger via a gravitational wave could confirm that black holes do exist in the way predicted by general relativity: as perfectly round objects made of empty, warped space-time. The discovery of gravitational waves would also reveal if they travel at the speed of light or not. If they travel at light speed, then gravitons would be massless like photons. But if they travel at less than light speed, then gravitons could have slight mass. This could have profound impacts on fundamental physics, according to Nature.

Loading more stories
wpDiscuz
3
0
Would love your thoughts, please comment.x
()
x
| Reply
Binary black holes are rumored to be part of the gravitational wave announcement today. What are binary black holes and what happens when they merge?