The Blue Jays are more determined then ever to make a run at the World Series after an almost-there moment last season. (Instagram)

After staging one of the most successful seasons in franchise history last year, the Toronto Blue Jays, not to mention their fans, are anxious for an even better on-diamond performance this year.

And it all gets started in spring training.

The Blue Jays head south to Florida for a brand-new crack at a World Series run, determined to put the almost-there disappointment of last season collectively behind them. Read on for all the important dates as well as details on the squad’s schedule and training location. Here we go:

The Jays hold their spring training games and workouts at Florida Auto Exchange Stadium in Dunedin, Florida. The 5,509-seat stadium is the only location Toronto has ever held its spring training in franchise history. Before the stadium was built at this location, it housed Grant Field. 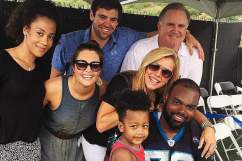 Loading more stories
wpDiscuz
0
0
Would love your thoughts, please comment.x
()
x
| Reply
After last year's run, the Toronto Blue Jays are ready for more and it all gets started at spring training this year. Check out all the details here.