A former Miss New Jersey and Princeton graduate has died after a horrific car accident in which she hit three trees. Cara McCollum, 24, was driving her Ford Mustang convertible along Route 55, Salem County, New Jersey, when the car spun out of control just before 7 p.m. on February 15. She was the only person in the car at the time of crash. A Facebook page dedicated to her confirmed the sad news that McCollum had died at around 4:30 a.m. on February 22. The posting read:

Thank you all for this tremendous outpouring of love and support for our Cara. We can’t begin to tell you how much your prayers have meant to us in this incredibly difficult time.

Cara passed away this morning. Her family was with her in the operating room, and she died peacefully at 4:31am. Before she died, Cara made the selfless decision to donate her organs. At this very moment, she is saving lives.

We’ve prayed constantly for a miracle, and we believe God has answered our prayers. Although it’s not the miracle that we first envisioned, it’s a miracle nonetheless.

In the end, it’s not the years in your life that count. It’s the life in your years. Please accept our sincerest thanks for your heartfelt prayers. We all will miss her now that she’s gone.

McCollum suffered from a rare tumor that means she can only use nine of her fingers, according to a profile on her in the Princeton Alumni magazine. She just turned 24 a week before the accident.

She was in critical condition after suffering head wounds and was being treated at Cooper Health Systems in Camden, New Jersey. The cause of the accident is still under investigation by the New Jersey State Police. NBC Philadelphia reports that she was wearing her seatbelt at the time of the crash though NJ.com reports that she wasn’t. Neither drugs or alcohol are thought to have been a factor in the crash. Shore News Today reports that snow and ice could have impaired McCollum’s driving. The website reports that on February 16, McCollum underwent brain surgery. Her friend, David Holtzman, told SNT, “I’m sick to my stomach. She is an unbelievable lady, living her dream of being in the newsroom. It’s just mind-boggling that this could happen to her.”

Her last Instagram post came just hours before the crash, in it she wished her followers a Happy Valentine’s Day.

McCollum was an anchor on South New Jersey (SNJ), a Jersey-based TV network. On their Facebook page, SNJ said, “Cara is a beloved member of our SNJ Today family. She and her family are in our thoughts and prayers.” She fronted the Millville-based station’s first broadcast news program in July 2015. The station chief, Frank DiMauro, said at the time of her appointment, “Cara has experience as a journalist, spokesperson, and TV host. She also has a passion for literacy and a personality to match. Cara is a wonderful addition, trusted news source and supporter of all things South Jersey.”

3. Her Talent in the Miss New Jersey Pageant Was Her Piano Playing

She was Miss New Jersey in 2013 when she was 20 years old. McCollum’s talent was her piano playing, performing a version of Liberace’s “Malaguena.” She won a $11,000 scholarship. CBS News reported at the time that McCollum was planning to be an advocate for youth literacy. An Arkansas Times piece on McCollum from 2010 talked about her early advocacy for literacy and her own obsession with reading, she mentions how she donated 1,000 books to her local children’s library. That feature added:

She isn’t strictly bookish. She’s a dancer and artist (a prize-winner in print-making and watercolor). She also sings, plays the piano and debates. Because of her love of literature, she thinks she’ll major in English in college.

The Star Ledger reported that she was pulled over by a cop for failing to come to a complete stop while she was driving to have her official photos taken for the pageant.

4. She Was Valedictorian of Her High School in Arkansas & Later Majored in English at Princeton

A native of Forrest City, Arkansas, McCollum is a 2014 graduate of Princeton University where she was an English major, according to her Facebook page. She was valedictorian of her high school class.

She told the Star Ledger in an interview that she was accepted into Harvard but chose Princeton because, “I was a Jersey girl through and through. There was no question in my mind.” In that piece she also spoke about the differences between Jersey and Arkansas, saying:

You don’t have any tractors driving on the street up here. People drive a lot faster. You’ve got places to go, people to see. Thank God for my GPS. That thing is my lifesaver.

McCollum also told the newspaper, “You’re blond and you do pageants. So people think you’re not intelligent. I look forward to disproving that.” 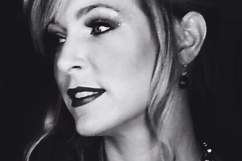