A massive construction crane that was swinging a wrecking ball collapsed in downtown New York City, crushing cars and leaving at least one person dead, the New York Post reported. It collapsed on Worth Street between West Broadway and Church Street around 8:24 am. Emergency responders reported to the scene and traffic in the area was backed up and diverted. At this time, it's not known why the crane collapsed. The person who died was a worker on the scene. The crane was 15 to 18 stories tall. Click through the gallery to see more pictures taken by people on the scene and working nearby, along with information about traffic delays in the area.

At least two more people were seriously injured from the collapse, the New York Daily News reported. Authorities are now saying that two people may have died and a gas leak has been reported at the scene of the collapse. One person was trapped in a car after the crane collapsed, but has since been released. One driver on the scene, Jesse Natale, told New York Daily News that he was waiting at a light at Worth St. and Church St. when the crane fell. "If I caught that light, I'd be dead probably," he said, adding that it looked like an avalanche when it happened. (Twitter/NYPD News) 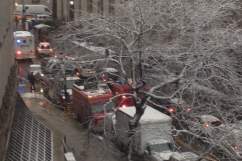 New York Crane Collapse: The Videos You Need to See

Read More
Breaking News, New York, New York City
A massive crane collapsed in lower Manhattan, killing one and trapping some in nearby cars. These are photos from people on the scene.