Punxsutawney Phil greets admirers while handler John Griffiths holds him after he saw his shadow predicting 6 more weeks of winter during festivities in Punxsutawney, Pennsylvania on Feb 2, 2008. (Jeff Swensen/Getty Images)

Today is Groundhog Day and the Groundhog Club of Punxsutawney, Pennsylvania will let us know if it’s more winter or an early spring. Read funny quotes about the holiday here.

The holiday is hosted every year by its originators, the Groundhog Club of Punxsutawney, Pennsylvania, established in 1887.

Here are quotes, poems, and sayings about Groundhog Day, including a few from the famous movie by Bill Murray.

“The groundhog is like most other prophets; it delivers its prediction and then disappears.” – William Vaughn, American columnist and author

Old Groundhog stretched in his leafy bed.
He turned over slowly and then he said,
“I wonder if spring is on the way,
I’ll go and check the weather today…”
– Unknown

Phil: What would you do if you were stuck in one place and every day was exactly the same, and nothing that you did mattered?
Ralph: That about sums it up for me. – Groundhog Day, (1993)

Though the groundhog and crocus creep into their holes
It’s Spring, and the almanac shows it;
Though a polar wave over the continent rolls
It’s Spring! And we don’t care who knows it!
– Robert J. Burdette, “March,” c. 1888

“Spring is when you feel like whistling even with a shoe full of slush.” – Doug Larson, American columnist 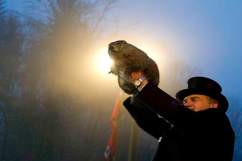 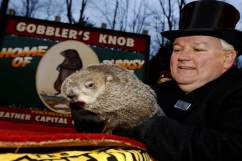 Loading more stories
wpDiscuz
2
0
Would love your thoughts, please comment.x
()
x
| Reply
Today is Groundhog Day and the Groundhog Club of Punxsutawney, Pennsylvania will let us know if it's more winter or an early spring. Read funny quotes about the holiday here.