What do you say to someone who celebrates Chinese New Year?

There are two ways to say the traditional “Happy New Year” to someone depending upon if they speak Mandarin or Cantonese Chinese. However, they are both written the same way as “恭禧發財” and only the pronunciation is different.

But what does “Gong Xi Fa Cai” or “Gong Hey Fat Choy” mean when literally translated?

According to Urban Dictionary, it literally means “wishing you to enlarge your wealth.” 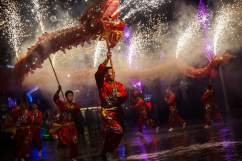 Chinese New Year: All the Memes You Need to See

Year of the Monkey: All the Memes You Need to See

Read More
Chinese New Year
What is the traditional Chinese New Year greeting for someone who is Chinese? Find out how to say "Happy New Year" to someone in both Mandarin and Cantonese here.