Six people were killed and two others were wounded Saturday night in a series of apparently random shootings at three different locations in Kalamazoo County, Michigan, authorities say.

A “strong suspect” who matches the description of the shooter driving a vehicle similar to one seen near the shooting scenes is in custody, police tell WWMT-TV. At least one gun was found in the car, police said.

The suspect has been named by WWMT-TV as Jason Dalton, a 45-year-old white male from Kalamazoo.

“This is a tragic chain of events for our community and we are diligently continuing the investigation to confirm if the correct person is in custody,” Kalamazoo Police Chief Jeff Hadley said.

The story is still developing. Here is what we know so far:

1. The Shootings Happened at a Cracker Barrel, Car Dealership & an Apartment Complex

According to WOOD-TV, the shootings happened in three locations in Kalamazoo: a car dealership, a Cracker Barrel restaurant and an apartment complex.

Listen to emergency radio dispatches from the incident below, courtesy of Broadcastify.com:

A woman was shot multiple times in the parking lot of an apartment complex, but survived. She has been hospitalized with serious, but not life-threatening, injuries. The victim told police she did not know the suspect.

One of the crime scenes @ Seelye Kia on Stadium pic.twitter.com/8fKvCWerrA

Police say a father and his son were killed at the Kia car dealership, WOOD-TV reports. A woman was inside the car when the shooting occurred, but the gunman apparently did not see here, WWMT-TV reports.

Four of the victims were killed at the restaurant and another was wounded there.

The victims were all shot in or near vehicles. 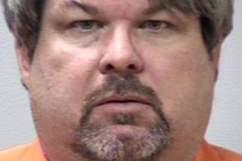 2. The Suspect Was Driving Around & ‘Shooting to Death Innocent People at Random’

Police said the suspect, identified by sources as Jason Dalton, was driving around Kalamazoo and shooting people at each of the scenes.

A motive for the shootings is not yet known.

“It appears we have someone driving around and doing nothing but shooting to death innocent people at random,” Kalamazoo County Undersheriff Paul Matyas told reporters from the Cracker Barrel shooting scene. 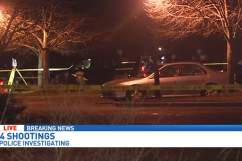 3. He Was Arrested After a Traffic Stop Near Downtown Kalamazoo

Pics just in: possibly the Chevy HHR that the suspect was driving in Kalamazoo shootings. @FOX17 pic.twitter.com/hBfYJ8CsZv

Police told WWMT-TV that the suspect, Jason Dalton, in custody was pulled over by an officer. Investigators are working to determine if the man arrested was the alleged gunman. The suspect was arrested at about 12:45 a.m. after a traffic stop near downtown Kalamazoo without confrontation.

He is being questioned at police headquarters.

The Kalamazoo Department of Public Safety said on Facebook:

Please be cautious and advise us if you know or have seen the suspect in this situation where 6 people have been killed throughout Kalamazoo County. Looking for a White male in his 50’s, believed to be driving a dark colored Chevy HHR, chrome wheels and mirrors. Vehicle may have some damage. Leads are currently and will continue to be followed.

They blue Chevrolet is similar to the one pictured in the tweet above.

4. The Public Has Been Warned to be ‘Vigilant,’ But the Incident Appears to be Over

Police have asked the public to be vigilant, but said the incident appears to be over and the community is safe.

They have warned people to make sure their doors are locked and to stay inside if possible.

WWMT-TV reported the suspect may have been tracked to the 600 block of Aquaview Drive, near Eagle Lake, but police now say he was not located there.

There were seven homicides in Kalamazoo County in 2014, MLive.com reported.

#Kalamazoo county averages 12 homicides a year. This shooting- it tallied close to half of that yearly count pic.twitter.com/kI9vFIA3ax

One of the shootings, at the Cracker Barrel restaurant, occurred in Oshtemo Township, which is a neighboring municipality.