Gravitational waves have been detected for the first time, proving Albert Einstein correct 100 years after his general theory of relativity, scientists say.

The announcement, which you can watch above, was made by scientists from Caltech, MIT, and the LIGO Scientific Collaboration, along with the National Science Foundation. LIGO is a system of two identical detectors constructed to detect tiny vibrations from passing gravitational waves.

“Gravitational waves carry information about their dramatic origins and about the nature of gravity that cannot otherwise be obtained,” scientists working on the project said in a press release. “Physicists have concluded that the detected gravitational waves were produced during the final fraction of a second of the merger of two black holes to produce a single, more massive spinning black hole. This collision of two black holes had been predicted but never observed.”

“With this discovery, we humans are embarking on a marvelous new quest: the quest to explore the warped side of the universe—objects and phenomena that are made from warped spacetime. Colliding black holes and gravitational waves are our first beautiful examples,” said Kip Thorne, a Caltech physics professor who was part of the project. 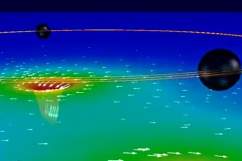