A 16-year-old Swedish girl has been rescued from ISIS captors in the city of Mosul. The teen, Marlin Stivani Nivarlain, was saved on February 17 by Iraqi and Kurdish counter-terrorism forces, according to a statement from the groups. She had traveled from her homeland to Syria with a boyfriend she met online. The rescue attempts were launched when Nivarlain was able to make contact with her mother. From there, Nivarlain’s mother contacted the Swedish authorities who began the rescue.

1. Nivarlain Said She Didn’t Know About ISIS When She Agreed to Go With Her Boyfriend to Syria

Iraq government troops remove bombs planted in houses and streets in Ramadi’s Husseiba easten district on February 15, 2016, after retaking the city from the Islamic State group.
The government retook Ramadi over the past weeks and efforts to reconquer more land from IS are now expected to focus on Mosul, the jihadists’ main hub in Iraq.
(Getty)

The statement says that she was “misled” by an ISIS member and traveled to Syria where she was taken to Iraq and held in the Islamic State controlled city of Mosul. That area has been under the control of the Islamic State since June 2014. Radio Sweden reports that Nivarlain lived with other women in an apartment while her boyfriend attended training camps during the day. The house had no electricity or running water, according to the girl.

She told Kurdistan 24 in an interview that she met the boy online and he asked her to go to Syria with him. Nivarlain said that she didn’t know about ISIS or Islam and agreed to go. She went into detail about the extensive journey she took with the man, from Sweden to Denmark and then to Germany, eventually making their way to Syria. All of their travel was done via train and car.

Swedish media reported in December 2015 that a 17-year-old national had been arrested in Austria on the suspicion that she was planning to join ISIS in Syria. Her mother told authorities that the girl’s brother had found his sister’s cell phone. On it she expressed her happiness at the November 2015 Paris Terror Attacks. Her lawyer told the media that, “She doesn’t understand the world any more. All she wanted to do was get away from her parents, and now she finds herself in prison.” He added that she only had around $200 on her so therefore was “hardly going to conquer the world.”

2. She’s Still in Kurdistan Where Officials Are Working to Get Her Back to Sweden

She’s a native of the southern Swedish city of Boras. According Iraqi and Kurdish forces, they were “called upon” by the government in Sweden to try to rescue Nivarlain. The statement says, “She’s currently in the Kurdistan region. We are working with Swedish authorities to allow her to return home as quickly as possible.”

Swedish police stand by police cars outside a house used as a temporary shelter for asylum seekers in Boliden in northeastern Sweden on November 19, 2015, after police raided the house. A man believed to be suspected of planning terror attacts in Sweden has been arrested, Swedish Security Service (SAPO) confirms. Swedish media had published the photo of the alleged suspect, Mutar Muthanna Majid, reporting that he has fought alongside ‘ISIS’ in Syria. (Getty)

The BBC reports that there has been no official confirmation from the Swedish government that Nivarlain is safe. A spokesperson from the government told Swedish media, “We have no information to hand out about this case.”

A map showing the distance between Nivarlain’s home city and Gothenburg. (Google Maps)

In November 2015, Swedish police chief Ulf Bostrom said that the Swedish city of Gothenburg was “per capita, the European city from which most people have joined Islamic extremist groups.” Bostrom added that ISIS “has the strength, intellectual capacity and ability to coordinate. They are no fools.” He had earlier said in May 2015 that around 100 Swedish jihadis had returned to Sweden and that nobody had been prosecuted.

Nivarlain’s home city of Boras is less than 40 miles west of Gothenburg. English Islamaphobic newspaper the Daily Express reported in December that ISIS militants had been spreading propaganda in Swedish cities promising to kill “non-believers.”

5. Around 120 Swedish Troops Are on the Ground Helping in the Fight Against ISIS

Since April 2015, Sweden has been a part of the coalition against ISIS. Al Arabiya reported that the Swedish government had send 120 soldiers to advise Kurdish Peshmerga forces. 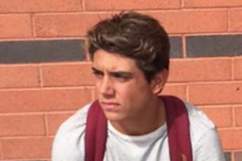