Governor Nikki Haley is aboard the Marco Rubio bandwagon.

Haley, the state’s popular, two-term governor, endorsed Rubio at a rally in Chapin on Wednesday evening. You can watch the video of Haley’s endorsement speech at the top of this post. The South Carolina GOP primary takes place on Saturday.

Haley’s endorsement comes at a critical time for Rubio, who needs a strong finish in South Carolina after finishing fifth in New Hampshire. The latest polls show Rubio in a tight race with Ted Cruz for second place, while Donald Trump continues to lead the pack.

Haley is the third prominent South Carolina Republican to back Rubio. Senator Tim Scott and Congressman Trey Gowdy, the chairman of the House Select Committee on Benghazi, have also endorsed the Florida senator.

Haley, the daughter of Indian immigrants, and Scott, the one of only two African-American senators, are both considered rising stars in a Republican party trying to make inroads with non-white voters. Rubio and Cruz, both the sons of Cuban immigrants, are vying to become the first Latino presidential nominee from either party.

Haley and Rubio, both 44, have plenty of similarities. Both are among the youngest people to hold their respective officers. (Haley is the youngest governor in the country.) And both were elected as conservative insurgents in the Tea Party wave of 2010. Both have at one point delivered the Republican response to President Obama’s State of the Union address: Rubio in 2013, when he took what is now an infamous sip of water, and Haley in 2016.

The State reports that Haley had been considering endorsing Jeb Bush, but chose Rubio in part because his polling numbers indicate he has a better chance for a strong performance in the Palmetto State.

It’s hard to say how much of an impact Haley’s endorsement will have. But it certainly can’t hurt. In 2012, Haley endorsed Mitt Romney, who lost the South Carolina primary to Newt Gingrich before going on to win the nomination. But as the Daily Telegraph’s Tim Stanley points out, Haley’s popularity among South Carolina Republicans has soared over the past four years.

And as Nate Silver points out, the three South Carolina GOP officials who have endorsed Rubio are considerably more popular than Senator Lindsey Graham, who endorsed Jeb Bush after dropping out of the race in January. 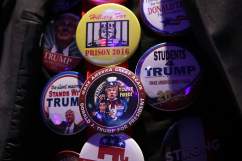