At least three people were killed, including a three-year-old, when a severe storm brought damaging winds and at least one tornado to Virginia today. The governor of Virginia, Terry McAuliffe, declared a state of emergency from the severe weather event. Cities that were hit hard included Waverly, Alexandria, Chesapeake, Virginia Beach, Richmond, Hampton Roads, Newport News, and Tappahannock. By far the worst hit, as known so far, was Waverly, where all three deaths occurred. Homes and buildings were destroyed and cars were left overturned. The above video shows some of the terrible damage that the tornado in Waverly left behind. The storms in Virginia are winding down, but the damage is just now being assessed.

These are videos from the storms and a clear view of the terrible damage. This was from the Virginia State Police:

Sgt. Michelle Anaya with Virginia State Police shows media the impact of the storm that hit #Waverly and killed 3. pic.twitter.com/BgO4jpxqeT

You can see even more damage in this video:

Along with the videos, here are some photos of the damage in Waverly, Virginia, shared on Twitter: 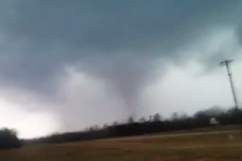 North Carolina Tornado: The Videos You Need to See

Read More
Breaking News, Severe Weather, Virginia
Tornadoes hit hard in Virginia, destroying homes in Waverly and leaving several people dead. These are videos and photos of the storm and the damage.