In what may just go down as the most heartwarming moment of the entire presidential campaign, a small bird visited Bernie Sanders during his rally in Portland, Oregon. At first, while Sanders was talking about education, the crowd started laughing and pointing at something on the ground near his podium. That got his attention, so he turned to see what everyone was talking about. When he saw the bird, he broke into a big laugh and everyone cheered. He said, "Now you see, this bird doesn't know it..." and the bird took off and landed on his podium. At that point, Sanders' expressions were pretty much priceless and the entire crowd burst into cheers. When the bird flew away, Sanders said, "I think there's maybe some symbolism here... I know it doesn't look like it but that bird is really a dove asking us for world peace. No more wars." (Watch the entire video of the #BirdieSanders moment here.)

After that ridiculously adorable moment, Twitter went wild with the #BirdieSanders hashtag, which quickly ended up as one of the top trending hashtags. From "Put a bird on it" to comments about Nature itself endorsing Sanders, the tweets, memes, and photos are a welcome change from the scandals covering the election news cycle earlier today. Click through the gallery to see the best memes, tweets, and photos from #BirdieSanders. This first meme was shared by Erik Blair on Twitter. (Twitter) 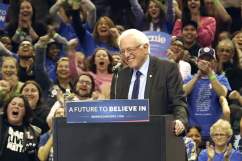 Read More
Breaking News
When a bird seemed to endorse Bernie Sanders during his rally, #BirdieSanders took over the Internet. These are all the memes, photos & tweets you need to see.