The last time we saw Bridget Jones, she was happily attached to Mark Darcy and no longer a miserable drunk London spinster. Well, at least less miserable and drunk.

It’s been 12 years this then, and people were beginning to lose hope that she and her men problems would ever return.

Renée Zellweger, who first played the curvy blonde in 2001, has kept a relatively low profile since the sequel to Bridget Jones’s Diary, Bridget Jones: The Edge of Reason. She’s been in a handful of movies but stayed out of the spotlight for the most part.

Women (and men) all over the world were thrilled to find out that Zellweger was returning to the big screen for a third installation of the series, the trailer of which dropped yesterday.

Bridget Jones’s Baby starts out at Bridget’s wedding to Mark Darcy, played by Colin Firth, but quickly plops Bridget back on her couch with a bottle of wine and Celine Dion blaring, thanks to a divorce from the lawyer.

If anyone’s hoping Hugh Grant will make an appearance, they shouldn’t hold their breath. He doesn’t appear in the trailer but Patrick Dempsey from Grey’s Anatomy stepped in to play Bridget’s new love interest.

In new the Bridget Jones film, Mark Darcy and Renee Zellweger might have a baby. (Working Title Films/YouTube)

Bridget then finds out she’s pregnant, because, nothing ever goes smoothly in her world. It’s unclear who the father is, to audiences and Bridget.

Filled with hilarious scenes of Bridget in a spin class, Bridget attempting to get a promotion at work, and Bridget hitting on Ed Sheeran, the trailer has left audiences wanting more.

Bridget Jones’s Baby is set to be released in September 2016. 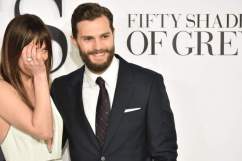