Three explosions rocked the Belgian capital of Brussels on Tuesday, killing more than 30 people and wounding more than 170 others, authorities say. ISIS has claimed responsibility for the series of deadly terror attacks.

The first explosion occurred at the Brussels Airport in Zaventem. The second bombing occurred in the Maalbeek Metro Station about an hour later.

You can see a map showing where the attacks occurred below:

The attacks occurred within an hour Tuesday morning. Here is a timeline and details of the two bombings:

8 a.m.: Two Bombs Explode at the Brussels Airport in Zaventem

At least 14 people were killed when two suicide bombers detonated explosives at the Brussels Airport in Zaventem, just outside the city, CNN reports.

The blasts blew out windows and caused the ceiling to fall in. Panicked travelers and airport employees rushed out of the building.

The first explosion occurred near a check-in desk.

Police are searching for one suspect seen in a photo along with two other suspected attackers: 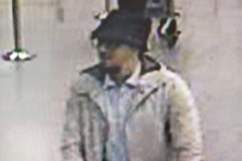 9:19 a.m.: A Bomb Explodes at the Maalbeek Metro Station

Broken glass is seen outside an entrance to Maelbeek metro station. (Getty)

About an hour after the first explosion, a bombing rocked a metro station in Maalbeek in Brussels.

According to the BBC, the blast occurred as a train was leaving the station. The bomb was detonated in the middle car of a three-car train, the BBC reports.

At least 20 people were killed in that attack.

You can see videos showing the aftermath of the attack below: 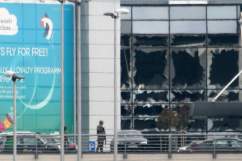 Loading more stories
wpDiscuz
0
0
Would love your thoughts, please comment.x
()
x
| Reply
Two terrorist attacks killed more than 30 people in Brussels, Belgium. See a map of where the bombings occurred and a timeline of the explosions here.