The woman chosen by Google to be celebrated in the March 9 doodle is a performer who “made music from thin air,” according to the company’s description.

Clara Rockmore was born in Lithuania’s capital city of Vilnius in what was then part of the Russian empire in 1911. From the age of 5, Clara was making waves in the musical world when she began studying at the Saint Petersburg Conservatory. In her youth, she was an accomplished violinist. She is still the youngest person to ever be admitted to the school.

Suffering from malnutrition she was forced to abandon the violin and instead moved on to the theremin, and thus became that instrument’s most famous exponent. The instrument is commonly used to create an erie science fiction-type theme in movies. It has also been used by Led Zeppelin, particularly on the songs “Whole Lotta Love” and “No Quarter.” The instrument also found its way on to albums by the Rolling Stones and the Beach Boys, the latter group using it in the melody for “Good Vibrations.”

Clara Rockmore is being celebrated by Google on what would have been her 105th birthday. The doodle is a game which invites users to learn how to play her instrument, the theremin, by moving your mouse through the notes to play a melody.

1. She Was So Good at Her Instrument, the Inventor of the Theremin Proposed to Her ‘Several Times’

Her musical mentor was the Russian inventor of the Theremin, Louis Theremin. He was so enamored with Clara that he proposed to her several times but she refused each time.

Clara’s teacher in St. Petersburg was Leopold Auer. The two would resume their relationship after Theremin and Clara’s families, separately, left Russia for the U.S.

It was in 1933 when Clara married entertainment lawyer Robert Rockmore and she adopted his name. She called him Bobby. Her maiden name was Reisenberg. Among Robert’s clients were Irish-American playwright Eugene O’Neill and Civil Rights activist and singer Paul Robeson.

In 1949, Robeson made a statement in Paris that was viewed as anti-American and pro-Communist. His next concert in the U.S, prompted the Peeksill Riots. As a result, Robeson was forced into hiding, he lived at the Rockmore’s home on Stillwater Lake in New Castle, New York. Clara had toured with Robeson during the 1930s and 40s.

Robert Rockmore died in 1963 after hitting his head on some ice, according to an essay on Clara’s life by her great-nephew Steve Sherman.

However Rockmore’s nephew, Joe Rockmore, told Heavy.com that in fact Clara’s husband died after suffering a heart attack while on a business trip in Chicago.

Read more about Clara Rockmore in Spanish at AhoraMismo.com: 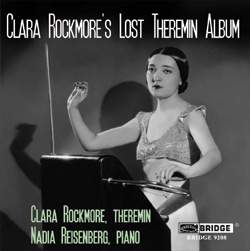 2. Clara Didn’t Record an Album Until She Was 66 Years Old

Despite touring from coast-to-coast in the U.S., including performances with the New York, Philadelphia and Toronto philharmonics, she never formally recorded any of her material. In an interview with music engineer Robert Moog, she explained that it was his coaxing that convinced her to record The Art of the Theremin in 1977.

That was the only album she recorded during her lifetime. Robert Moog produced it with his wife, Shirleigh Moog. In 2006, eight years after her death, a second album, Clara Rockmore’s Lost Theremin Album, was released.

In November 1977, Clara explained to Robert Moog about why it took her so long to record an album:

I really was busy. I was on tour, playing about four concerts a week. I was young, and I didn’t think that anything had to be perpetuated. I had a beautiful recording with Stokowski, taken off the air. It got broken. I never followed up to find out who did it, and I could not duplicate it.

I talked to Goddard Lieberson of Columbia Records. He thought I played beautifully. But he said there was not demand for theremin records. How could there be a demand for something that doesn’t exist? In order to make it exist, you have to make a big promotion. At that time with the Oistrackhs and Heifetzs and all that, they weren’t out to start promoting a record of one person.

It took a certain person by the name of Bob Moog to pry the present recording out of me.

This method of playing helped to pave the way for modern synthesizer users. In her interview with Moog, Clara spoke about then modern electronic music:

This is a very favorite subject of mine. At this stage of my life, I am not that concerned with my career, because I’ve had it all, – eight suitcases of reviews. I don’t need critical acclaim now. But I won’t live forever. The world of electronic music is just at the beginning.

Now I think the theremin should be accepted because of the interest in electronic musical instruments and what is possible electronically.

And I want to stress that this is a very space-conscious time. Years ago when I played, nobody was going to the moon, yes? It was completely unknown. Today every child of seven goes to the supermarket with his mother and thinks nothing of the door opening before him, by magic. Now the world is geared towards that. So much is done in electronics.

In a way, it shocks me and surprises me that the theremin is still the only space-controlled instrument. It is a voice for an artist to control. It is not a computer. The composers now, they put everything on a tape recorder and it always remains a tape thing.

They do the most complicated things, but they put it together like mathematics. The theremin is just another musical voice that the artist can feel free to do with what he can. In all this time, nobody else thought of making a space controlled instrument better, – or worse!

All the other electronic instruments are more mechanized.

In 2012, Robert Moog’s synthesizer was made into a Google Doodle. His instrument was used by the Rolling Stones in 1969. You can watch video of Keith Richards trying to play the machine above.

3. Her Family Had to ‘Cross Many Borders Illegally’ in Order to Get to the U.S. So that Clara Could Fulfill Her Potential

According to Clara’s biography at the website for the Clara Rockmore Foundation, her family left St. Petersburg after the 1917 Russian Revolution. They first tried to resettle in Lithuania but found it impossible and so decided to make their way to America.

Her sister Nadia says in the biography, “It was a long journey. We had to cross many borders illegally, and we traveled without knowing whether or not we would ever reach a country from which we could get a visa to the U.S.” Clara and her sister were relied upon to give impromptu concerts along the way in order to help the family continue their journey.

In 1921, the family were able to book passage on a steamship to New York City. According to records, they landed at Ellis Island on December 19, 1921. She was then able to resume her studies with Leopold Auer. However shortly after this, Clara began suffering from arthritic problems in her bow arm, born out of poor childhood nutrition, forcing her to quit the violin.

She then met Leon Theremin, who had just invented the world’s first electronic instrument. The Independent reports that he was commissioned to create the instrument by the Radio Corporation of America after he performed at Carnegie Hall.

Clara said, “I was fascinated by the aesthetic part of it, the visual beauty, the idea of playing in the air and I loved the sound. I tried it, and apparently showed some kind of immediate ability to manipulate it. Soon Lev Sergeyevich gave me, for a present, the RCA model theremin.” The instrument amplifies sound using two antennas, one for pitch and one for volume. The musician then uses his or her fingers to interrupt the the magnetic field created by the antennas.

Throughout her musical life, the instrument would be modified to her specifications, most famously being increased to 5 octaves instead of 3. It was pianist Josef Hofmann, who after seeing her perform, suggested lowering the profile of the instrument so that the musician’s hands would be more visible.

Arguably her breakthrough concert came at New York City’s Town Hall in 1938. Earlier, in 1936, the Camden Herald wrote that Clara was changing the public’s mind about the theremin and what was musically capable with it.

4. Despite Being Severely Ill She Swore to Stay Alive to See Her Grand Niece be Born

Clara lived most of her adult life at The Parc Vendome at 350 West 57th street in Manhattan. In 1997, her health began to deteriorate. She had a life long hatred of hospitals, according to Steve Sherman’s essay.

She battled pneumonia and suffered a severe heart attack a year before her death, though she remained committed to remaining alive in order to see her grand niece be born. Fiona Nadia Sherman was born on May 8, 1998. On May 10, Clara passed away inside of her New York apartment at the age of 88. Her sister, Nadia, who passed away in 1983, had previously written about her sister:

I’m very fortunate in having the wonderful Clara Rockmore as my sister, and it’s a joy to perform with her.

I forget about what instrument she plays, and in any case, it wouldn’t make any difference to the way we work together.

She is a consummate musician, with impeccable taste, so we could attain wonderful ensemble almost without rehearsing. We also loved each other, which probably had something to do with it.

Documentary filmmaker Steve M. Martin made a documentary about Clara and her instrument in 1991 titled Theremin – An Electronic Odyssey. You can watch it above. In her later years, Martin became a trusted friend and confidant of Clara’s.

She was the subject of Irish electro pop band The Garland Cult’s 2007 song “Clare Rockmore” from the album Protect Yourself from Hollywood. In 2014, author Sean Michaels won the 2014 Scotiabank Giller Prize for his novel Us Conductors which was a fictionalized account of Clara’s relationship with Leon Theremin.

Her sister Nadia Reisenberg was also a prodigy, though on the piano. That’s an instrument the Clara felt all musicians should learn the fundamentals on. According to Clara, the family were given their first piano by Uncle Pav, their mother’s bachelor brother.

Nadia also studied at he St. Petersburg Conservatory under Leonid Nikolayev. Unlike her sister, Nadia was unable to rekindle her mentorship when the family relocated to the U.S. In America, Nadia studied under Josef Hofmann, the same man who helped Clara evolve with her instrument.

She went on to become a teacher at Julliard. Her son is storied music critic Robert Sherman. He played an important role in the release of his aunt’s posthumous 2006 album.

Loading more stories
wpDiscuz
0
0
Would love your thoughts, please comment.x
()
x
| Reply
The woman chosen by Google to be celebrated in the March 9 doodle is a performer who "made music from thin air."