Demetrius Pinckney, 21, was found dead after crashing his dirt bike following a shooting in the Grays Ferry section of the city, WPVI-TV reports.

Demetrius Pinckney, the brother of Dion Waiters, was found dead Tuesday night of severe head injuries after crashing his green dirt bike in the 2300 block of Morris Street, WPVI-TV reports.

Police told the news station there was some type of argument or disturbance nearby that led to numerous dirt bike and ATV drivers chasing each other. Witnesses said they heard several gunshots.

Investigators have not said if Pinckney was shot before crashing at about 8 p.m.

A 20-year-old man was hospitalized with gunshot wounds to the thigh and buttocks in a connected incident, police told NBC Philadelphia.

2. His Brother Paid Tribute to Him on Instagram & Will Not Play in Wednesday’s Game

“The call I just got about my lil brother wasn’t expecting this shit…..crushed my heart I never question why…. But this hurt…. I promise I got Yu mark my word….. Love Yu kid.. ?? r.i.p ?,” he wrote as the caption of a photo with Pinckney.

Waiters will not play in Wednesday night’s Thunder game, the team says.

3. Waiters Dealt With the Deaths of Several Family Members & Friends to Violence While Growing Up in Philadelphia

Waiters, a Philadelphia native who played college basketball at Syracuse, dealt with several tragedies involving family members and friends while growing up.

In 2006, his older cousin, Antose Brown, was shot to death. A year later, another cousin, Isiah Brown, and his best friend, Rhamik Thomas, were fatally shot in separate incidents less than three months apart.

A third cousin, Carl Brown, died in a motorcycle accident in 2009.

“That was the hardest time in my life,” Waiters told ESPN in 2009. “I lost three cousins and a best friend, and they all came at the wrong time. Everyone told me to be strong and that they were in a better place. But I didn’t want to hear that. They were gone and I will never see them again.”

4. Pinckney Was One of 6 Homicide Victims Tuesday Night in the City of Philadelphia

Pinckney was killed along with five others during a spate of violence in Philadelphia Tuesday night. It is not yet known if any of the homicides are connected.

“People should be enjoying themselves instead of going out creating this carnage in the streets,” Police Commissioner Richard Ross told CBS Philadelphia. “Nonetheless, this is what we’re dealing with, so we’re going to work very hard to get to the bottom of all of them.”

No arrests have been made in any of the homicides, Ross said. The commissioner called it one of the most violent nights in recent memory, Philly.com reports.

5. His Death Is the Third Tragic Loss for the Thunder Organization This Season

The death of Waiters’ brother is the third tragic loss for the Thunder organization this season.

Assistant coach Monty Williams’ wife, Ingrid Williams, died in a car crash in February. The team’s part-owner, Aubrey McClendon, was killed after driving his SUV into a wall last week.

“We were saddened to hear the news of the passing of Dion’s brother, and he has our full support,” Thunder General Manager Sam Presti said in a statement. “Dion and his family are in our thoughts and prayers during this difficult time.”

Thunder star Kevin Durant talked about the losses with reporters on Wednesday. You can watch video above.

“That’s how life throws it at you sometimes. It’s definitely unfortunate,” Durant said. “The only thing we can do is continue to stick together as an organization, as a family, and help everyone through this. That’s what brings everybody together I guess. It’s definitely tough for all three families but they have our support and our love.” 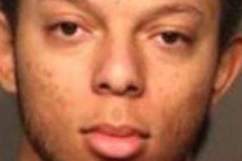