Republican party frontrunner Donald Trump said in an MSNBC interview that women should have “some form of punishment” for having abortions. The GOP leader was talking to Chris Matthews in Wisconsin on March 30 when he made the comments.

If you can’t watch the above video, here’s a transcript of what was said:

If Congress were to pass legislation making abortion illegal and the federal courts upheld this legislation, or any state were permitted to ban abortion under state and federal law, the doctor or any person performing this illegal act upon a a woman would be legally held responsible, not the woman.

The woman is a victim in this case as is the life in her womb. My position has not changed – like Ronald Reagan, I am pro-life with exceptions.

A February 2016 ad from Ted Cruz’s campaign titled “Supreme Trust,” took aim at Trump’s 1999 interview with Meet the Press where he said, “Well look, I’m, I’m very pro-choice.” At that time, Trump was running considering running on the Reform Party ticket for the 2000 presidential election.

During the first Republican debate for the 2016 nomination race, Trump explained how he evolved on the issue of abortion. He talked about a friend of his considered an abortion but decided against it. Trump said, “It was going to be aborted and that child today is a total superstar. It is a great, great child.”

In a statement put out almost immediately after Trump’s March 30 comments, a Planned Parenthood spokesperson said:

Donald Trump is flat-out dangerous. Women’s lives are not disposable. There’s nothing else to say, Donald Trump’s remarks today have said it all.

Just when you thought it couldn't get worse. Horrific and telling. -H https://t.co/Qi8TutsOw9 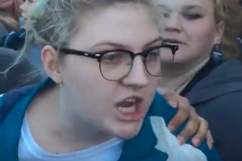 Loading more stories
wpDiscuz
9
0
Would love your thoughts, please comment.x
()
x
| Reply
Republican party frontrunner Donald Trump said in an MSNBC interview that women should have "some form of punishment" for abortions.