In the video, the Palestinian man moves his head and appears to be alive before he is shot by a soldier.

You can watch the graphic video below or by clicking here. The shooting occurs at about the 1:45 mark of the video.

According to the New York Times, the Israeli military says the soldier seen in the video has been detained.

“The IDF views this incident as a grave breach of IDF. values, conduct and standards of military operations,” Lieutenant Colonel Peter Lerner, an army spokesman, told the Times. “A military police investigation has commenced and the soldier involved has been detained.”

Haaretz reports that two Palestinian suspects were killed, 21-year-old Fatah Ashraf and 20-year-old Ramzi Alkasrawi. It is not clear which man’s death is seen in the video.

Prime Minister Benjamin Netanyahu told the Times of Israel, “What happened in Hebron doesn’t represent the values of the IDF. The IDF expects its soldiers to behave level-headedly and in accordance with the rules of engagement.”

According to the New York Times, 30 Israelis, two Americans and a Palestinian bystander have been killed in attacks by Palestinians since October, while Israeli soldiders have killed 180 Palestinians during the same period.

“Today, we have the proof, the actual video of the soldier shooting the Palestinian youth in the head after he was shot and wounded and laying on the ground,” Hisham Sharabati of the Palestinian human-rights group Al Haq, told the Times. “Now we will wait and see if the Israeli soldier will be prosecuted for his actions.” 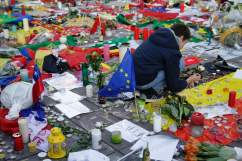 Loading more stories
wpDiscuz
3
0
Would love your thoughts, please comment.x
()
x
| Reply
A graphic video shows an Israeli soldier fatally shooting a wounded Palestinian stabbing suspect as he lies on the ground. The soldier has been detained.