Katrina Pierson is national spokesperson for Republican presidential frontrunner Donald Trump. The Texan Republican activist has been “linked” to a National Enquirer story regarding alleged extramarital affairs by her boss’s 2016 rival Ted Cruz. Cruz called the article “garbage” and said the “smears are completely false.”

Born to a single mother, Pierson was given up for adoption, but her mother later changed her mind. After a rocky start to adulthood, Pierson became active in Republican and Tea Party politics, at one point even gaining the endorsement of Rafael Cruz, Ted’s father. Like Trump, Pierson is known for controversial remarks, including calling the 2012 major party nominees “half-breeds.”

1. The National Enquirer Included a Pixelated Photo Said to Look Like Her

With the hashtag #CruzSexScandal trending on Twitter, one user noted the similarities between Pierson and a pixelated photo included in the National Enquirer story on Cruz. Right-wing blog Conservative Treehouse ran with the story, saying:

Firstly, they post pictures of the collective mistresses. NE would never legally ‘go there’ if they did not hold a very reasonable certainty the outlined players were factually part of the story.

Secondly, there’s at least one face in the group that is easily identifiable.

When you accept the NE editorial/legal requirement for research and attributed comment prior to publication, you recognize there is more than a strong probability each of the outlined group (pictured) was contacted prior to publication; and one of those is very close to the Donald Trump campaign.  Ergo, it’s entirely likely presidential candidate Donald Trump knew this story was coming out.

Trump memorably threatened to “spill the beans” after a Cruz-affiliated Super PAC used his naked wife in a Facebook campaign. That detail, however, makes things “a little too convenient” for some observers, like the left-leaning blog Crooks and Liars:

The pictures they weakly disguise are pretty easy to match up with people. The image above suggests that Katrina Pierson is one of his so-called mistresses, as well as others.

It feels to me like Trump dropped a whole lot of garbage over at the Enquirer to discredit Ted Cruz, and that sense is backed up even more by the fact that one of the lovely ladies is supposedly Donald Trump’s spokeswoman. That’s just a little too convenient.

Ted Cruz and Katrina Pierson during her 2014 Congressional campaign. (Twitter)

In 2014, Katrina Pierson challenged incumbent Republican Representative Pete Sessions’s seat, and was ultimately unsuccessful in garnering the nomination. The primary race was cast as the insurgent Tea Party movement, represented by Pierson, against establishment Republicans, and her two-to-one loss was seen as a serious blow to the movement.

She did, however, get key support from future rivals. Rafael Cruz, a Texan preacher and the father of 2016 candidate Ted, endorsed her run, calling her a “strict constitutionalist.” Sessions campaign officials, however, were quick to point out that Rafael’s endorsement did not imply Ted’s. Pierson, however, claimed at the time that the younger Cruz had called her “a fearless, principled conservative.”

3. Her Comments May Have Contributed to Cruz’s Win in Utah

Cruz led the polls for Trump for a long time, and ran away with the caucus, with Trump finishing a distant third. A major contributor was Trump’s high unfavorability among Mormons, who make up a substantial portion of Utah’s population and an even bigger slice of its Republican electorate. Pierson unwittingly aided in this unfavorability with comments in an interview, seen above, in which she defended Trump’s comments about Muslims, in the process conflating fundamentalist LDS sects with the mainstream LDS Church in describing government actions against them:

While local media suggested she may have misspoken, the Salt Lake Tribune quoted Utah Congressman Jason Chaffetz criticizing the campaign for not knowing better.

Pierson received heavy criticism for the comments, with Gawker calling her remarks “menacing” and “eugenical.” Pierson defended herself on CNN, chalking the remarks up to campaign “silliness” and stating that she identifies herself as “half-breed.”

5. She Was Almost Given Up for Adoption at Birth & Arrested at 20

Pierson’s mother became pregnant with her at 15, deciding to give her up for adoption to a Kansas family rather than an abortion, of which Pierson’s grandfather disapproved. While in Kansas, Pierson’s mother changed her mind, bringing the newborn Pierson back to Texas and raising her there. Pierson’s family received government assistance, but she later said her success was in spite of, not because of, government aid.

It wouldn’t be Pierson’s only unusual stop on the road to politics. At 20, Pierson and a friend stole $168 worth of clothes from a department store in Plano, Texas. Pierson told police that she hadn’t wanted to go through with it but needed the clothes for jobs she was trying to obtain. She later pleaded no contest, and the case was deferred. She credits the incident with helping her turn her life around. 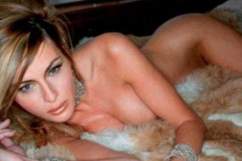 Correction: An earlier version of this post incorrectly identified Katrina Pierson’s 2014 run for office as a Senate run. She ran for a House seat in Texas’ 32nd district, not a Senate seat.

Loading more stories
wpDiscuz
19
0
Would love your thoughts, please comment.x
()
x
| Reply
Katrina Pierson, spokesperson for Republican 2016 frontrunner has been accused of carrying on an affair with Republican rival Ted Cruz. Here's what you need to know.