A viral video inside a food manufacturing plant owned by Kellogg’s Cereals appears to show an employee peeing all over the food production line. The video shot to the front page of Reddit and has already been pulled by the company, but a copy of it can be viewed above.

According to CBS Detroit, the video was first thought to come from a plant in Battle Creek, Michigan but this was proven false. The video is from a Memphis, Tennessee facility and was recorded in 2014.

Kellogg takes this situation very seriously and is shocked and outraged by this video. We have alerted law enforcement authorities and regulators, and are conducting a thorough investigation.

WREG Memphis shared another statement released by the company:

Kellogg takes this situation very seriously and we were shocked and deeply disappointed by this video that we just learned of yesterday. We immediately alerted law enforcement authorities and regulators. A criminal investigation is underway as well as a thorough internal investigation.

Our investigation revealed that the video was recorded at our Memphis, TN facility, in 2014. Products that could have been potentially affected were Rice Krispies Treats, Rice Krispies Treats cereal and puffed rice cake products, all of which would be past expiration date.

Food quality is of the utmost importance to Kellogg Company. We are outraged by this completely unacceptable situation, and we will work closely with authorities to prosecute to the full extent of the law. 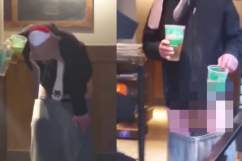 WATCH: Man Poops on Floor in Starbucks After Being Refused Bathroom [NSFW]

Loading more stories
wpDiscuz
13
0
Would love your thoughts, please comment.x
()
x
| Reply
A viral video inside a food manufacturing plant owned by Kellogg's Cereals appears to show an employee peeing all over the food production line.