Mitt Romney gave a speech today at University of Utah’s Hinckley Institute of Politics. The speech began at 11:30 a.m. Eastern time and lasted a little less than 20 minutes. Click here if the above video is not working in your browser. The speech starts at the 4:18 mark of the above video.

Click here for a full transcript of Romney’s speech.

Romney attacked Trump throughout the speech:

I predict that there are more bombshells in his tax returns. I predict that he doesn’t give much if anything to the disabled and to our veterans. I predict that he told the New York Times that his immigration talk is just that: talk. And I predict that despite his promise to do so, first made over a year ago, he will never ever release his tax returns. Never. Not the returns under audit, not even the returns that are no longer being audited. He has too much to hide. Nor will he authorize the Times to release the tapes. If I’m right, you will have all the proof you need to know that Donald Trump is a phony,” Romney said during the speech.

Romney questioned Trump’s integrity and encouraged voters to vote for other candidates in upcoming primaries to stop Trump from winning the nomination. He mentioned Florida and Ohio specifically as states where voters needed to look at other candidates aside from Trump. Romney essentially referenced a brokered convention where the party would come up with a way to stop Trump from being named the nominee.

Trump responded to Romney’s speech later in the day at a rally in Portland, Maine. Trump claimed Romney “begged” for his endorsement in the 2012 election. He referenced his loss in the election and called Romney a “failed candidate”. 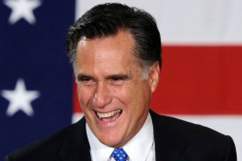