Champion snowmobile racer Todd Palin is in intensive care in Alaska after he crashed his vehicle. CNN reports that the crash happened on the night of March 13. As a result, his wife, former Alaska Governor Sarah Palin has canceled her appearance at a Donald Trump rally in Florida on March 14 as she heads back to her home state to be with her husband.

Trump’s campaign said in a statement, “Todd Palin was in a bad snow machine accident last night and is currently hospitalized. Gov. Palin is returning to Alaska to be with her husband and looks forward to being back on the campaign trail soon. Mr. Trump’s thoughts and prayers are with the Palin family at this time.”

1. Palin Last Had a Major Snowmobile Crash in 2008

In February 2008, the Alaska Dispatch News reported that Palin was involved in a crash in the Tesoro Iron Dog race. The newspaper described the crash as “major.” Though Palin was lucky and only received minor injuries after his snowmobile hit a barrel that was hidden under fresh snow.

2. He’s a 4-Time Champion of the World’s Longest Snowmobile Race

Palin has been the winner of the Tesoro Iron Dog, the world’s longest snowmobile challenge, on four separate occasions. According to his official bio, his last win came in 2007. He’s competed every year since 1993.

His teammate for 2016 in the race was Shane Barber. It was the first year the two were racing together. Palin told Breitbart about the race:

It’s just a brutal, brutal race. It includes some of the toughest terrain in the state. It’s a fine line of how to dress.

Over-dress and you start sweating, and sweating and get dehydrated. You can leave Big Lake at 40 degrees above and arrive at McGrath and it’s minus 15. You have to expect everything and anything.

In a Facebook post, just prior to the 2015 Iron Dog race that the competition wasn’t for “Girly Men.” Her full statement said:

In downtown Anchorage today for the ceremonial kick-off of the world’s longest, toughest snowmachine race – the Iron Dog! Tomorrow is the official start where tough teams comprised of two racers on individual sleds that they’ve spent months wrenching on speed across Alaska through unbelievable conditions, upwards of 100 mph wide open to the elements!

Racers brave blizzards in pitch blackness atop frozen rivers to do their barehanded repairs of shocks, tracks, engines or anything else that gets thrashed during this crazy-tough endurance competition; they skip open Arctic waters between Native villages; they dodge wild animals throughout the 2030-mile extreme adventure that ends next Sunday in Fairbanks.

Breitbart reported in 2015 that Palin raced for the Chris Kyle Frog Foundation. Palin became friend with the American Sniper while the two worked on the NBC show Stars Earn Stripes.

4. Gov. Palin Has Been Stumping for Trump Since January 2016

Donlad Trump hugs Sarah Palin at a campaign event where he announced her endorsement. (Getty)

Prior to canceling her March 14 appearance, Gov. Palin had stumped for Trump in Florida at the Arcadia All-Florida Championship Rodeo and Florida Strawberry Festival on Sunday.

5. This Is the Latest Incident to Affect the Palin Family Following Track’s Alleged Suicide Attempt in January 2016

Just hours before his mother officially endorsed Donald Trump for president, Sarah Palin’s oldest son was arrested and accused of a drunken assault in Alaska. The incident occurred in the city of Wasilla where Track Palin, 26, was charged with assault, interfering with a report of domestic violence and possession of a weapon while intoxicated on January 18. He made his first appearance in court on January 19. In a statement to the New York Daily News, Wasilla police said, “An investigation revealed Track Palin had committed a domestic assault on a female, interfered with her ability to report a crime of domestic violence, and possessed a firearm while intoxicated. Palin was held without bail until arraignment.”

The New York Times later reported that both Track and his girlfriend called 911 after the two had been out partying. When officers arrived at the home, Track was belligerent and had to be handcuffed. His girlfriend was found under her bed with injuries to her eye. She told cops that Track had hit her. She added that Track then cocked a gun and put it against his head saying, “Do you think I won’t do it?” 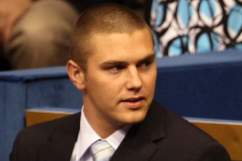