Astronaut Scott Kelly is returning to Earth today after a year in space, and you can watch the livestream right here (above) on NASA’s Ustream channel. Kelly’s return will begin at 3:10 p.m. Eastern and culminate around midnight. The schedule for the livestream, according to NASA, includes:

The NASA livestream may switch on and off periodically, but it should be running all the way to touchdown and shortly thereafter, around midnight.

Kelly is returning to Earth in a Soyuz spacecraft, along with cosmonauts Mikhail Kornienko and Sergei Volkov. The Soyuz will hurtle through Earth’s atmosphere at about 230 meters per second. A parachute will launch and he’ll land in Kazakhstan just before midnight. Once he touches down, he’ll have to stand up and stay still for three minutes and then go through a mini-obstacle course and try to walk in a straight line. All of that will be on the feed. The next morning, he’ll report to NASA for more tests, Science Alert reported.

Kelly’s twin brother, Mark Kelly, stayed on Earth as a controls subject. The purpose of Kelly’s year in space is to understand how humans react to being in space for a long period of time. The twins’ vitals will be compared. 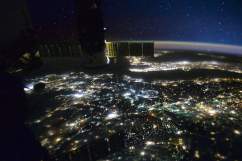